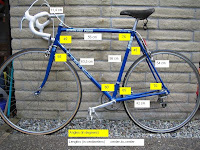 This is a Mercier Bordeaux-Paris from probably around 1984 or so.  I came across this bike at a local thrift store.  I was shocked that anyone would even donate such a bike and grabbed it immediately.  I love finding stuff at thrift stores... they are like never ending garage sales - and the proceed usually go to benefit some cause.

The graphic to the left gives the dimensions of the bike and angles.  It is a pretty tight geometry designed for road speed.  The front of the pedal toe clip will catch with the tire if you are not careful. 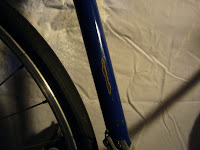 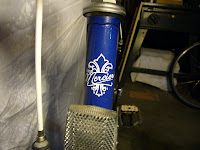 When I got the bike, it was absolutely filthy, flat tires and the bar tape was cotton and basically just a mass of glue with threads stuck in it.  It took forever and a ton of Goof-Off to get the bars clean.  The decals on the bike were pretty rough and shredded (I guess this is common with Merciers).  There was enough decal when you looked at both sides to make out what they said though. There is a pretty large scratch in the right side of the seat tube (as you are sitting on it).  But I left the paint original.  It is a stunning royal blue - I've never seen another bike like it.  I took pictures of all the decals and sent them to Michael Swantak who ran a company called Velographics.  He replicated the entire set including the decals on the stem.  The only decal I did not have was the one  on the head tube.  We decided to make a generic Mercier logo label.  It is probably not what was there originally, but there as no way of knowing for sure. 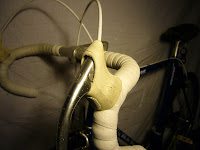 I replaced the brake and shifter cable housing with snow white ones.  The gum brake hoods were shot.  I found a set of white Campy hoods from a place in England.  Took about a month to get them in.  I put new tires and tubes on it and spent a lot of time cleaning and waxing it up.  Once I got the gunk off the handlebars, I wrapped them in a nice cushy white cork wrap. 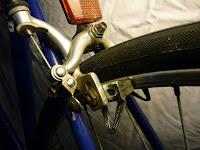 The bike has an almost full Campy gruppo - brake levers, brake blocks (including shoes), shifter levers, front and rear dérailleurs. I've never had Campy before, so I'm not sure what level it is. I had a person at Recycled Cycles in Seattle take a look at it and he told me that Campy does lower end stuff as well as the high end stuff its known for.  I think this is comparable to the Shimano 600 gruppo I'm familiar with.  It has Nervar cranks.  I tacked on some no-name pedals with Christophe toe clips and white leather straps.  I prefer toe clips to the newer clip in pedals 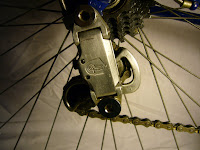 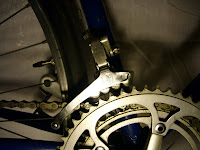 The front fork is the same color as the body of the bicycle.  I have an Italian bike of the same vintage (more on her later) that has chrome forks and seat stays and it looks fabulous.  This one looks good too, but I wonder what it would look like with chrome.  The top of the fork head has a Mercier logo embossed in the metal - nice touch.

Sheldon Brown's site has a nice write up on French bikes.  You can read more about the uniqueness of the French velocipedes there.  In particular, he has a whole section on the Helicomatic hub.  Doesn't sound too good, but I've never had problems with it. 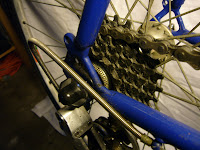 I'm going to keep this bike as kind of a museum piece. Once, I thought of donating it to a local bike shop to help a school fund drive.  That didn't work out, so I decided to ride it for a while (that is why it looks so dirty right now).  It rides great!  But, alas, it is just too small for me.  This is a 56cm bicycle and I ride a 59cm for the most part.  I just found myself too hunched over and it was painful  on longer rides.  I have a dream of someday opening a cycle shop and if I do, this will be one of the wall decorations!

charles
Posted by charles at 8:08 PM