Great news!  I got the original Elite headlamp for the Raleigh Twenty working without major surgery.  It was really difficult to tell whether it was a broken switch, the lamp, batteries...  After doing quite a bit of testing, I eliminated the bulb and battery issues.  I felt sure it was the switch.  Bad news because the switch box was a enclosed unit with fancy spring mounted brass contacts.  It was afixed to the casing by pop-rivets, which meant to get it apart would require basically breaking it beyond what I could repair again.

But after a bit of fiddling this morning with some heavy duty aluminum foil, it turned out NOT to be the switch, but the fact that there was quite a bit of corrosion at one of the contact points.  I thought I'd cleaned it enough to allow electricity to flow, but I guess not.  I bypassed the corrosion with a strip of foil taped to the outer casing and - presto - lights on and the switch works fine.

Now, let me say, the torch uses "D" batteries (which I've pretty much tried to eliminate from the house in favor of "AA" and "AAA" wherever possible) and they are HEAVY.  The output of the lamp is not very good compared to modern LED systems.  But, DAMN, does it look sweet up there!

Here are some closer pictures 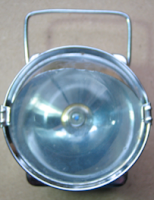 Here is a head on view.  Note the face of the lamp is glass in a chrome ring.  There is an "eyeshade" over the top.  This ring/glass assembly is held onto the body of the lamp by two flip clamps on the right and left side.


Here are side and back views.  Note again, the back cover is held in place by another larger flip clamp.  The square thing on the back is a slider space that goes over the bracket on the head tube of the Twenty.  It just slides on and off using the little handle! 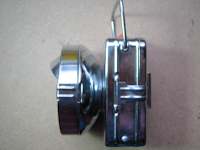 From the top down, you can see the "big red switch."  It takes a bit of force to move it, but there is a satisfying click when it goes into place. 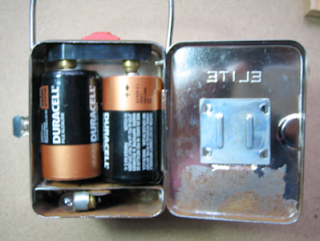 OK... now with the back door open.  Notice the corrosion on the door.  Someone left the batteries in too long!  The bottom panel where the batteries sit is also corroded - right side worse than left.  This is where I took a strip of heavy duty aluminum foil and connected the base of the right battery up the right wall of the box and taped it down.  Worked great!  Notice also the connectors on the top.  They are brass and spring loaded to hold the batteries in.  Also pretty slick - an extra lamp compartment on the bottom!! And the bulb works!  All of the fasteners in the lamp are either rivets or fold over tabs.  You can see the piece on the back door that holds the lamp to the bike is held on with four fold-over tabs.  This thing is HEAVY with the "D" cells in it.

charles
Posted by charles at 9:35 AM