You might be wondering about the "sponsored" link on the left...

For any of you who know me, I'm very much a BIG PICTURE thinker. I loved philosophy in college and am very much an "idea guy" when it comes to my strengths in life.

About two years ago, I came across Venkat's blog called ribbonfarm. He really has a way of taking complex ideas and building on them in ways that are fresh and visionary. He recently posted an analysis of corporations that, frankly, blew me away. http://www.ribbonfarm.com/2011/06/08/a-brief-history-of-the-corporation-1600-to-2100/

I have never supported a blogger monetarily before, but Venkat became my first. I highly recommend his blog

Swimming in the deep end...

For those of you that read this blog, you will know what I mean by going off the deep end...  This picture should sum it all up... 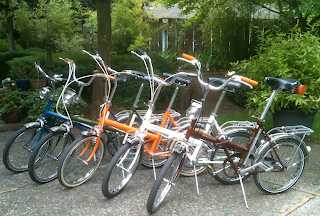 Now for the back story..  There is ALWAYS a back story, isn't there?

I have recently been searching the interwebs daily looking for a very specific bicycle.  I would love to get my hands on a Raleigh Lenton Reg Harris from the mid 50's  I've set up auto-search and RSS on "Lenton" and  "Raleigh Bicycle" in the local and regional Craigslists and eBay looking for this hard-to-find bike.  I'm not sure why, I just love the idea of setting up a three-speed touring/road bicycle.  I'm getting sick of derailleurs and shifting 12-21 speeds...  I find I only use three of them anyway.

But I digress.  Yesterday, I came across a post in the local Seattle Craigslist for "a pair of Raleigh Twenty's."  I usually have pretty good will power NOT to look at these ads, because, well, they are just TOO tempting.  Not sure what prompted me to take a peek, but once I saw the pictures, I knew I was doomed to have a lighter wallet..

I knew there were white Twenty's, but I had no idea there were ORANGE ones!!  Does anyone know the complete color palette of these bikes in the US? 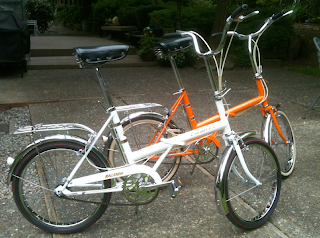 Pair the unique colors (and I had neither one in my current herd) with the fact that these bikes were IMMACULATE in terms of condition, and I was hooked.  Both bikes have pristine aluminum air pumps.  The decals are like new and the paint shows no signs of chalking.  Sure there are a few small blemishes and a tad of yellowing of the decals on the white one...  but hey, when I was that age, I had worse scars. 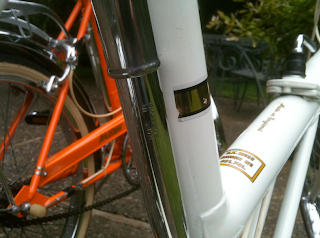 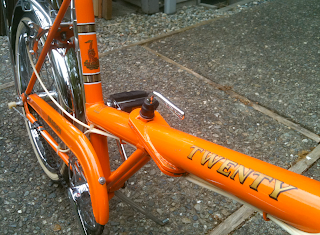 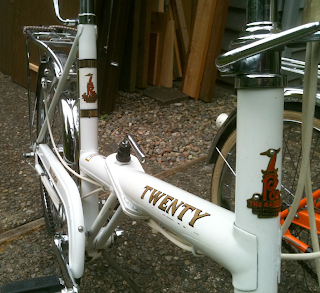 Here are a couple more shots just to give you an idea of how nice these bikes are.  There isn't even a speckle of black grease or dirty oil on the hub.  And in terms of wear, look at the pedals.  The rubber is perfect. 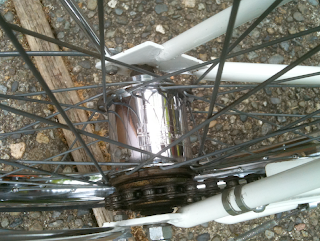 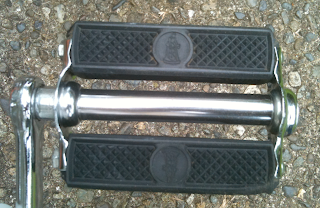 I purchased these bikes for $150 each from a very nice guy named Doug.  According to Doug, these bikes were his late parents and were purchased by them in the early seventies at a local Seattle bike shop - Gregg's Greenlake Cycle - it's still there.  "They just tootled around a bit... we took them to Stanley Park in BC once or twice... and then they ended up in the garage with a sheet over them for 40 years.."

In addition to the bicycles, I also got some other stuff.  A couple throw-away baskets for the front. But the most impressive thing was the original "Assembly Instructions...." and a set of Raleigh-specific "spanners.". 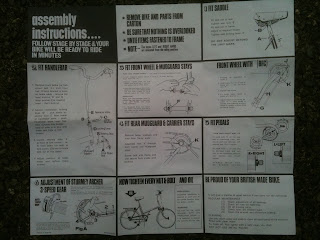 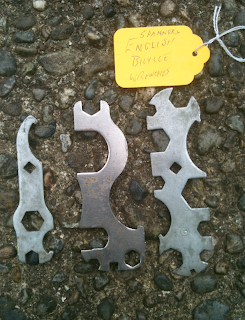 So that is about it... I gotta run to some graduation party now... but my mind will be elsewhere :-)