OK, so I lied a bit... I WAS working on some bike related stuff during the last couple of months of silence.

Here is my first prototype of an electrified Raleigh Twenty! 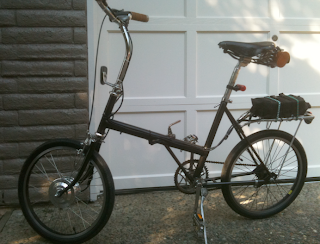 As any reader of this blog knows, back in July 2010, I picked up a blue R-20 with a single speed coaster-braked rear hub from a young lady in Redmond.  The bike had some serious condition problems, so I stripped it down and made it a single speed street machine.  I painted it out in black metallic Rustoleum, installed a paired wheel-set from a Specialized kids dirt-cross bike (also single speed and coaster-braked - needed to file out the front drops to get the wheel in, but the rear fit perfect) and cut the frame according to Sixty Fiver's instructions on the Raleigh Twenties web forum to install a threadless headset.  New Brooks B-66, Challenge bag and leather disc grips make up the bling!

So this bike was fun to put around on, but I had visions of it being an electric scooter someday.

My oldest son needed to do a culminating project for senior year of high school so he and I researched available electric hub motors.  There are quite a few out there.  Here were my criteria:

-I didn't care about speed.  I wanted a bike that could go on its own at a respectable speed, but would basically be a rider, a bike that I could pedal for real and "boost" from time to time.
-I wanted an electric bike that didn't LOOK/SMELL/TASTE or FEEL like an electric bike.  My dad had an electric conversion of a mountain bike back in the 80's and frankly, it was a clunker.  It was under powered and the battery weighed a ton.  It looked goofy and you'd never pedal the thing...

After a bit of research, we came across the Clean Republic systems.  These are 250 watt brushless front hub motors with your choice of sealed lead acid (SLA) or LithIon battery systems.  We purchased it at EBikes NW in Seattle.  We opted for the LithIon system which was more expensive, but claimed a 20 mile range (versus 10 for the SLA system) and a longer overall battery life of 4 years (versus a 1 year life for the SLA).

We had to have EBike NW staff (Thanks DJ!) help us with a couple items that were beyond our technical expertise:
- We needed to have the hub laced into the 20" rim that already existed on the bike.  I really want to learn how to lace wheels, but I wasn't up for the challenge yet.
- We needed to have the fork cold-spread to accommodate the wider hub.  This was a bit of a trick.  The fork couldn't just be spread because the fork drops would be too angled to thread the wheel onto.  It had to be spread then bent back perpendicular to the ground.  Basically this was done by spreading the forks first, putting in a block just above the point where the top of the hub would sit and compressing the fork ends back to vertical.  I didn't see this happen, but would have liked to witness the process so I could attempt it myself.

Here is my son at EBikes NW inspecting the newly bent fork... 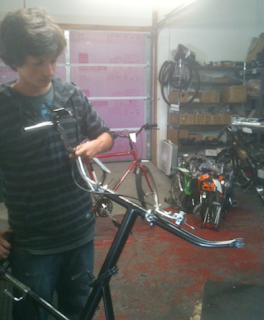 Once we took possession of the bike and the battery/cables/hub-wheel, we did the final install and cable tying.  It was pretty easy.  Below are close up photos of the front wheel, now with an electric motor hub.  It looks like a slightly larger version of the Sturmey Archer Dynohub!! 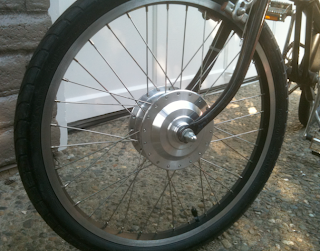 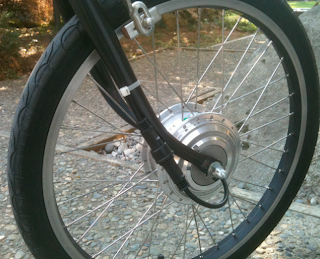 The cable system is a Y-configuration setup.  There is a larger metal connector that fastens to the battery/controller unit.  It then splits into one line that has the throttle switch and the other connects to the hub.  Super simple to install with zip ties.  I only had three black zip ties in my shop, so I used them on the frame and, seriously, black wires against black frame with black zip ties... the cabeling is basically invisible!!  I still have a few more white zip ties to replace (you can see one on the fork).  Once I've replaced them all, you'd hardly know there is cable running on the bike.  You need to leave some slack around the area where the head tube attached to the down tube so the handlebars can swivel.  I also opted to make the cable tight at the folding joint (which essentially makes the bike into a non-folder now). 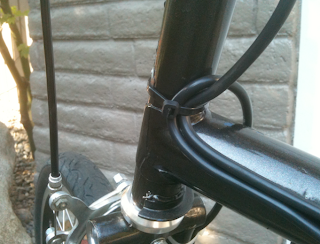 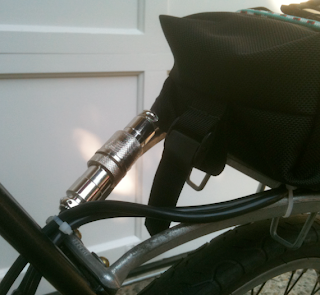 The actuation switch is mounted to the left handle bar.  It's just a red button.  Push it and go.  It comes with a velcro attachment that, frankly, was a fail from the start.  It kept slipping.  Eventually, I wrapped the bar in a bit of old inner tube and zip tied the switch over it.  Perfect.  It doesn't move at all. So, how does it run, you ask? Amazing!  Here are my initial impressions:

- Press the button and go.  It's that simple.  There is a switch on the battery/controller unit that must be in the "on" position before the thumb switch will work.  This is a nice safety feature.  The thumb switch is pretty sensitive and you wouldn't want the wheel to go accidentally.  I'm getting in the habit of turning the battery off after using it.
-There is a bit of hesitancy from when you push the button and the wheel goes.  Not bad, but it isn't an instantaneous power add. You need to think ahead just a fraction of time before when you need the juice.
- The wheel motor is 250 watts.  DJ at EBike NW put it this way: "A person on flat ground riding generates about 100 watts.  This motor adds 2.5 additional people to your riding."  And it feels about right. Two and a half additional people that only weigh about 12 extra pounds (motor is 6 lbs and battery is 6 lbs).
- When laced to a 26" wheel, the Clean Republic site claims a 15 mile per hour top speed.  Some people using the kit on 26" say they get 17mph. The smaller wheel means not as much distance traveled per revolution, thus a slower top speed.  I do not have a speedometer on this bike, but I'm estimating it tops out around 11-12mph.  Based on this chart (its in green about halfway down the page), you multiply the 26" wheel speed by 0.769 to get the max 20" wheel speed.  15 x 0.769 = 11.5mph.  17 x 0.769 = 13mph.  These seem about right.
- My only complaint is that there is something rattling around in the battery storage case, which is made of ballistic nylon.  The straps are tight, so I'm not sure what is making the noise.  I'd like to remove the battery/controller from the case, but the switch is integral to it (see below) and I'd need to break it.  I'm going to someday, but I'm not ready to yet.

FUTURE PLANS
My son and I plan to create a custom battery/controller case (probably in a steampunk style!) to hide the battery.  The case will be firmly mounted to the Pletscher rack on the bike and weatherized.  The case is going to be made out of 1/4" marine grade plywood and varnished.  I'm planning on attaching some pannier mounts so I can add grocery-getter baskets of some kind. 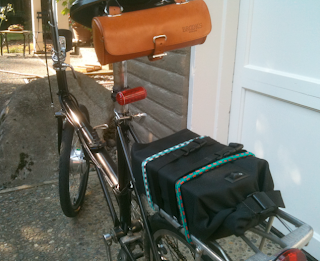 I already have an extra set of fenders from another brown Twenty.  I just finished painting them out in metallic black.  They will mount onto the bike as the rain (inevitably) starts...

This has been a really fun project and the bike is a hoot to ride.  Let me know if you have any thoughts or questions!