For a very long time, I've wanted to get a higher end touring bike to make my main ride. My biggest problem... I'm kinda cheap and don't want to spend the kind of money it takes to get a Rivendell or other custom frame. I love lugged frames made of steel. Good steel. I have a Surly Crosscheck that is a great bike, but it's a TIG welded frame and, well, I'm kind of a snob about it I guess. Once I started getting into old Raleigh's, it was only a matter of time before my eye would be caught by the International.

The DL-170 International was the top of the line touring frame made by Raleigh Carlton in the 1970s. Yes, the Raleigh bike most people would call the true "top of the line" from that time was the  Professional. But the fact is the Professional was the same as the International except for a few facets: the Professional had Campy brakes, it's frame was a tighter racing geometry and it had slope shoulder  fork crown. The International had Weinmann 999 center-pull brakes, flat chromed fork crown, and a more relaxed geometry designed for more comfortable touring. Both frames were made of double butted Reynolds 531 steel, arguably the best in the world at the time. Both were outfitted with a full set of Campy Nuovo Record (with the exception of the brakes, mentioned above).

My searches on eBay and Craigslist were not very fruitful... for years... Too much money (a top condition International can go for north of a grand) or too many dents and scratches. That changed a couple months ago. An add popped up on the local Craigslist for a green 1973 International with a few replaced parts (Shimano changers, brakes and such).  The ad was posted by a gent just down the street from me, so I went to see it.

He got a funny look on his face.

Um... OK.... So here he comes with a gorgeous specimen, original Brooks saddle was pretty worn, but the rest of the bike was in great shape except it was missing the rear changer and chain. Unridable, so no one had rode it in ages. Everything else was original condition...

I have tons of Brooks saddles. 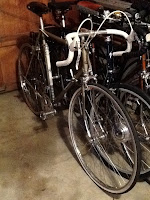 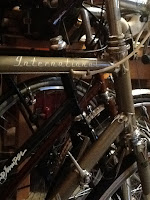 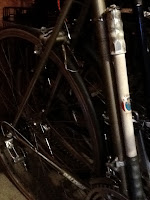 I ran to the cash machine and drove away with this beauty in my trunk...

The bike is completely stock and in great condition.  As I mentioned above, it was missing the rear derailleur and chain, so I began the eBay hunt for a Campy Nuovo Record changer.  As luck would have it, while I was waiting to see if I would be outbid on yet another one (they go fast), I stopped by Recycled Cycles in Seattle and they had one in the "special" case!  Same year and everything!  So it was meant to be.  Literally a few minutes later, I was riding her.  I've since added a pair of hammered Velo Orange fenders to the package.  The special thing about the International is the chrome.  Chromed forks, stays and headtube lugs... Very nice indeed...

The serial number on this bike is A4545.  There is a TON of information about these bikes at a great site called The Headbadge .  It seems that this serial number is NOT a lot of help in determining the age of this bike.  It is probably a 1973 given the lugs that are being used, the wrap-over seat stays on the seat cluster lug and the decal set.

Yesterday was it's maiden voyage of any significance.  The weather was nice.  Still a bit cold, but not soaking wet.  I took her on a 17 mile ride around Mercer Island.  The International handled like a dream.  Very responsive and, like other higher end steel frames I've had the pleasure of riding, powerful.  Every ounce of energy put into the pedals seems to translate to forward movement.  There is no sluggishness to the ride.

Overall, I'm very pleased.  I plan on making this bike my "main ride" for some time to come!

PS:  Know anyone who wants a nice Crosscheck?
Posted by charles at 5:35 PM