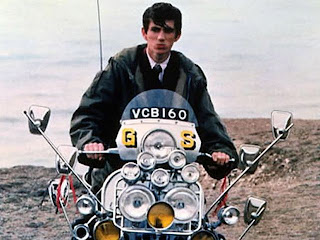 This image (courtesy of bringthenoiseuk.com) is from The Who's movie Quadrophenia.  I remember how amazed I was at the sub-culture of punks in England at the time who pimped out their scooters like this.  Since I had a Vespa at the time, I could kind of relate.  I also had a trench coat and my girlfriend had electric blue hair.  I loved it!

Well, look at the Raleigh Twenty I found on Criagslist yesterday! 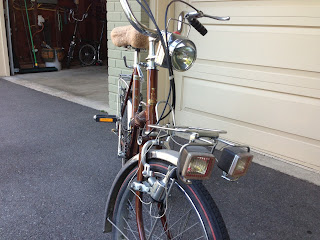 Coincidence? I think NOT!  Just look at it.  The start of a glory ride...

I MUST stop looking at craigslist.  This is the kind of thing that happens.  Last night I was sitting on the computer scanning through the listings for "Raleigh" and came across a "Raleigh Folding Bike."  I clicked in and saw this bike.  The first thing I noticed was the front rack.  I had seen a rack like this on a bike recently found in Ireland. 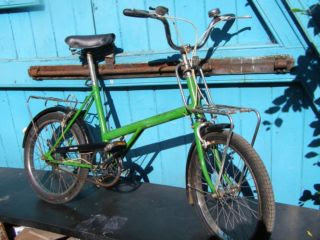 I think this idea of a "randonneur" Twenty would be kind of fun.  The hunt began for front racks with short stays... nada.

Until yesterday.  And in my own back yard!

It turns out this bike sat all day at a garage sale with no interested parties.  The grandson of the woman who lived in the house posted a few remaining items on craigslist and that is how the bike got there.  I called, but he was already gone, headed back home to Everett, WA.  I asked if it was OK to go over and see it, possibly to buy and he indicated his grandmother would be there.  "Twenty" minutes later, after a stop to the cash machine, I was there.  But she wasn't.  I waited, knocked, waited, walked up and down the street, tried again.  I probably looked like someone casing the place.  Thirty minutes passed and I called the guy listed in the ad.  "Just head on back behind the house.  It's under a blue tarp.  If you like it, just leave the money in the mailbox."  We talked price a bit, and without giving it away, I picked this bike up for sub-$100.  Very sub-$100! They needed to clear the decks.  It was a win-win.

Once I got it home and into the light of my garage, I could tell this bike has seen almost no riding.  Very dusty.  Good, not mud.  No rust.  It had been stored inside all these years, probably a basement corner or back of a garage.  There was a real tacky sheepskin cover on the original Brooks mattress saddle... in PERFECT condition!  These saddles are notoriously delicate and usually rip out.  Not this one.  Low miles and a sheepskin cover saved it. No rust on the springs and even the underside is pure white. 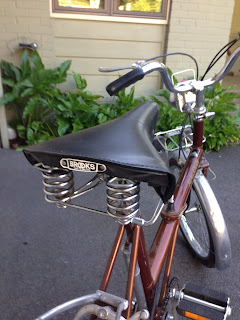 Look close... a headlight! Battery powered, to go with the TWO pop-bottle generator driven lights on the front.  All three work (after freshening the batteries) And, yes, that is a chrome air pump too. 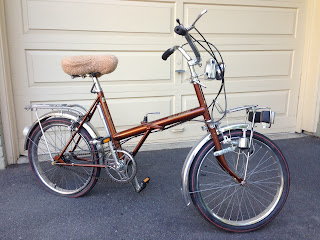 There are only two things wrong with this bike.  First, it is missing the chain guard.  Not that big of a deal, they come around often enough.  I think I might even have a brown one in the shed...  Second, and of a little more concern is that the Sturmey Archer AW hub (dated 5-75) was free wheeling in both directions. I added a dab of oil, and spun it.  No good.  Shot some Tri-Flow down the hole and now I can get second and third gear.  After patching the flat, I tinkered with the adjustments, but I cannot seem to get first. 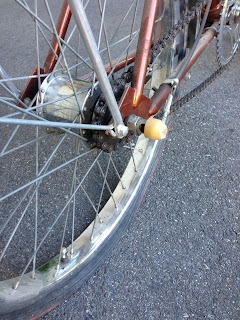 Plans?  Clean her up and get the hub working.  This might just be a nicer root beer brown bike that the one I currently have.  I may swap out a few parts, build this one up to be my keeper and sell the other.  It's still pretty dusty, but I can tell the decals are nice and it doesn't have many, if any scratches on it.

Now to find a few other Mods to hang out with...