Here's the second bike I picked up on a trip down to Portland...  a gold Phillips Twenty! 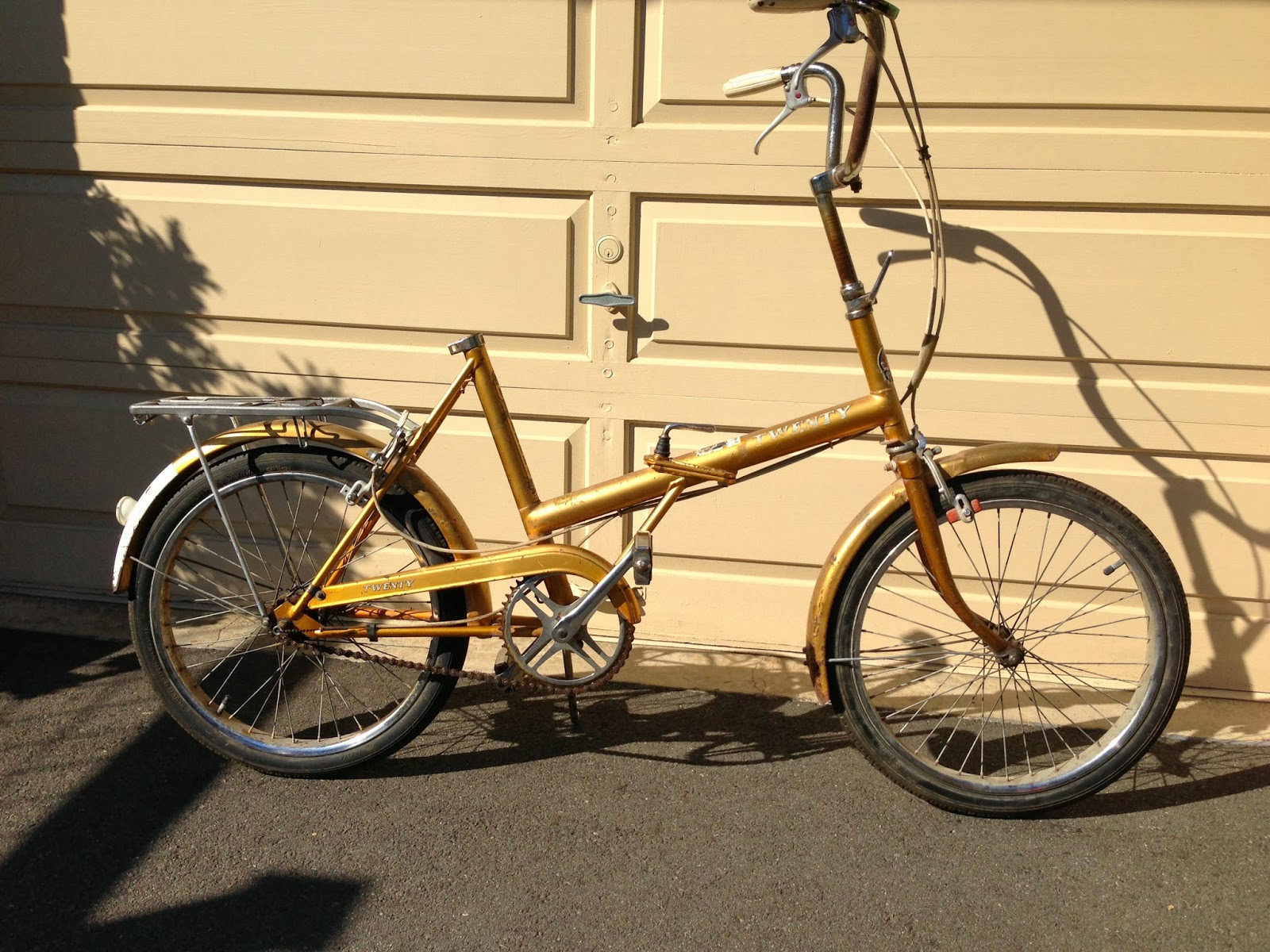 This bike was pretty much in original condition, but on the rough side.  It was missing the seat post and saddle, along with the seat post clamp lever.  The bike had the hi-rise bars on it.  The chain was just a rusty lump of grease and dirt.  Ditto the S-A AW hub and the wheel rims were pretty rusty too...  the fenders are in pretty sad shape.  I'm planning on putting the nice chrome ones from my spare green Twenty on this one.  Silver and gold...

Here are some more pictures in original condition... 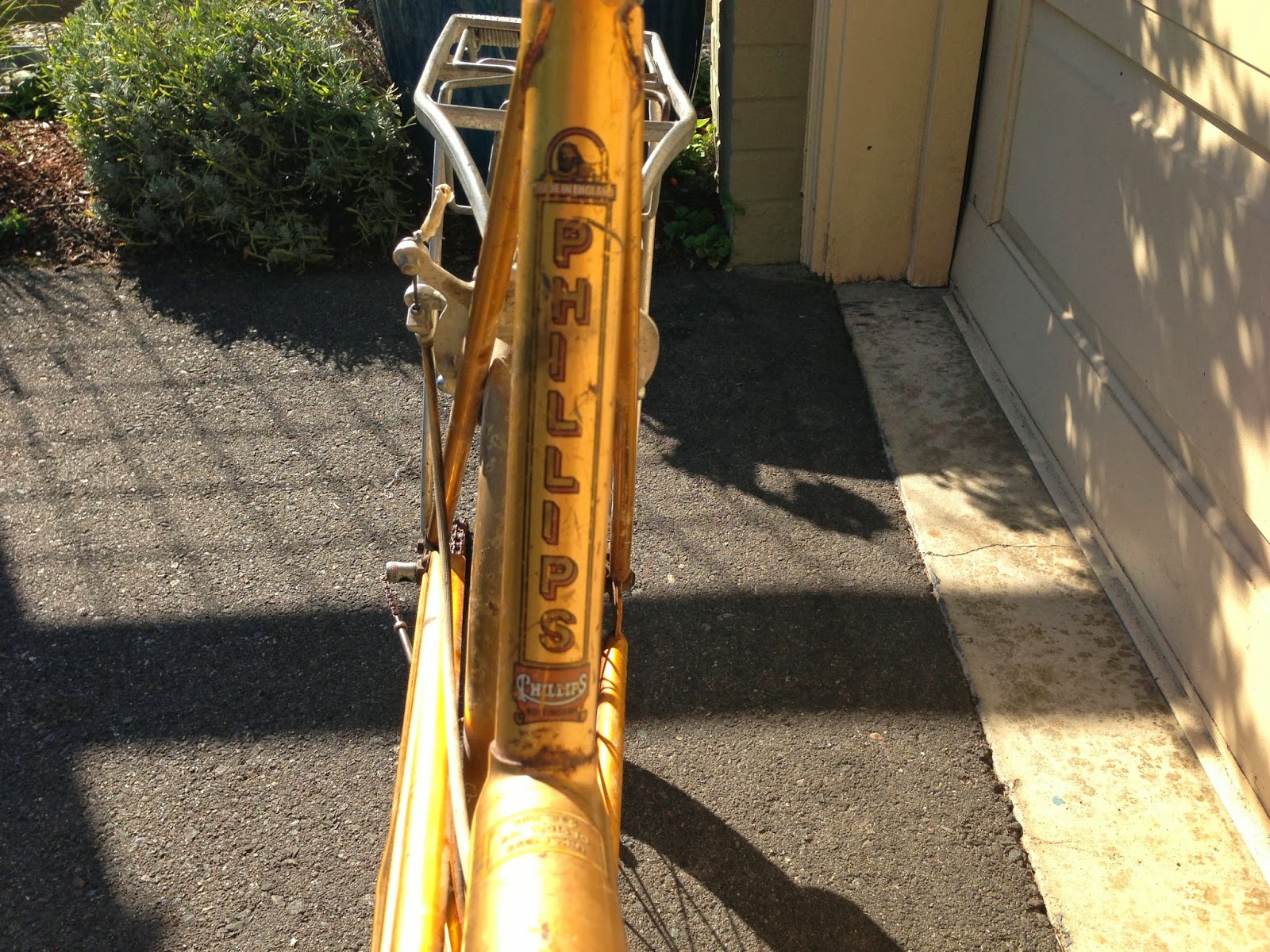 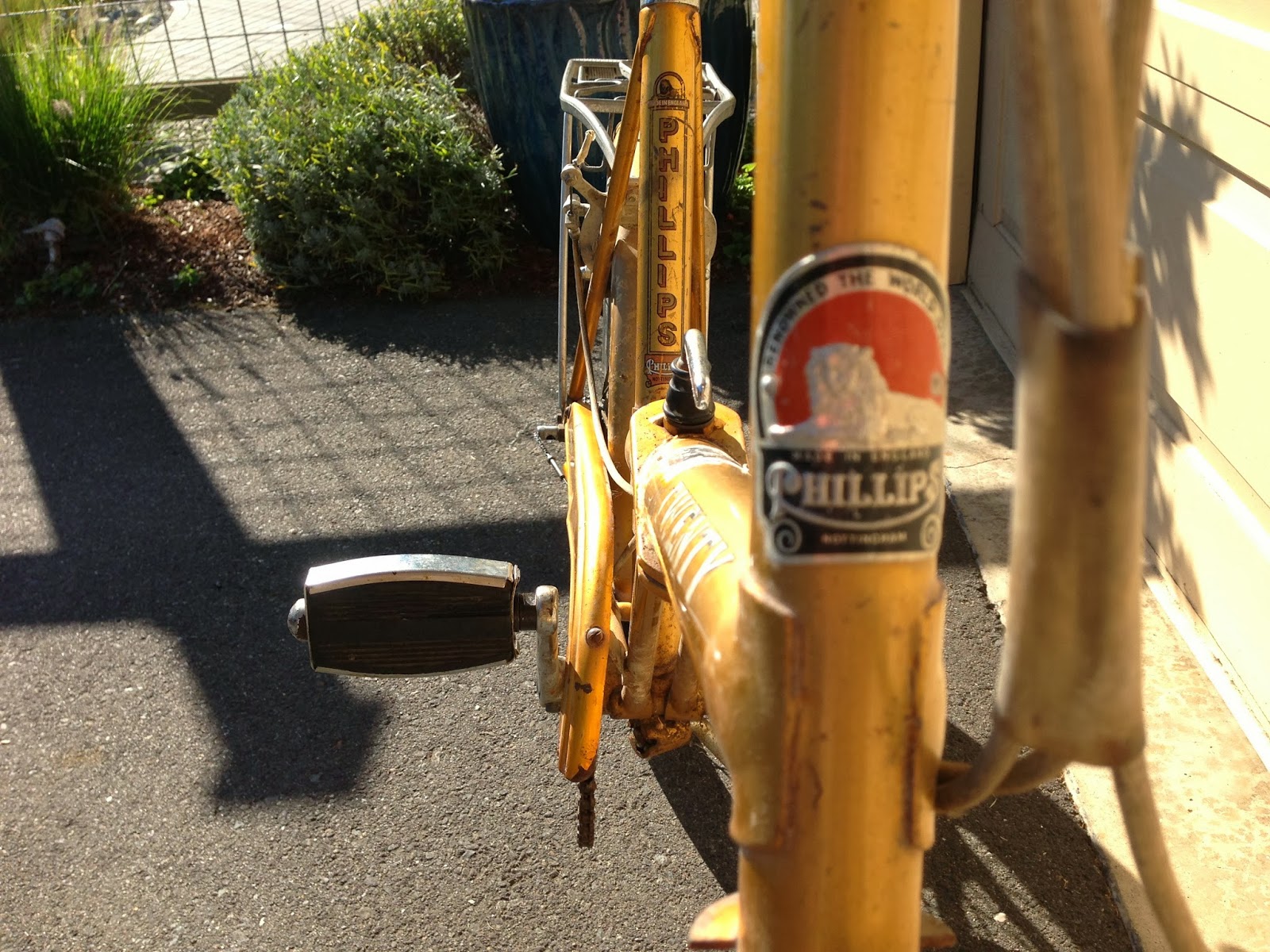 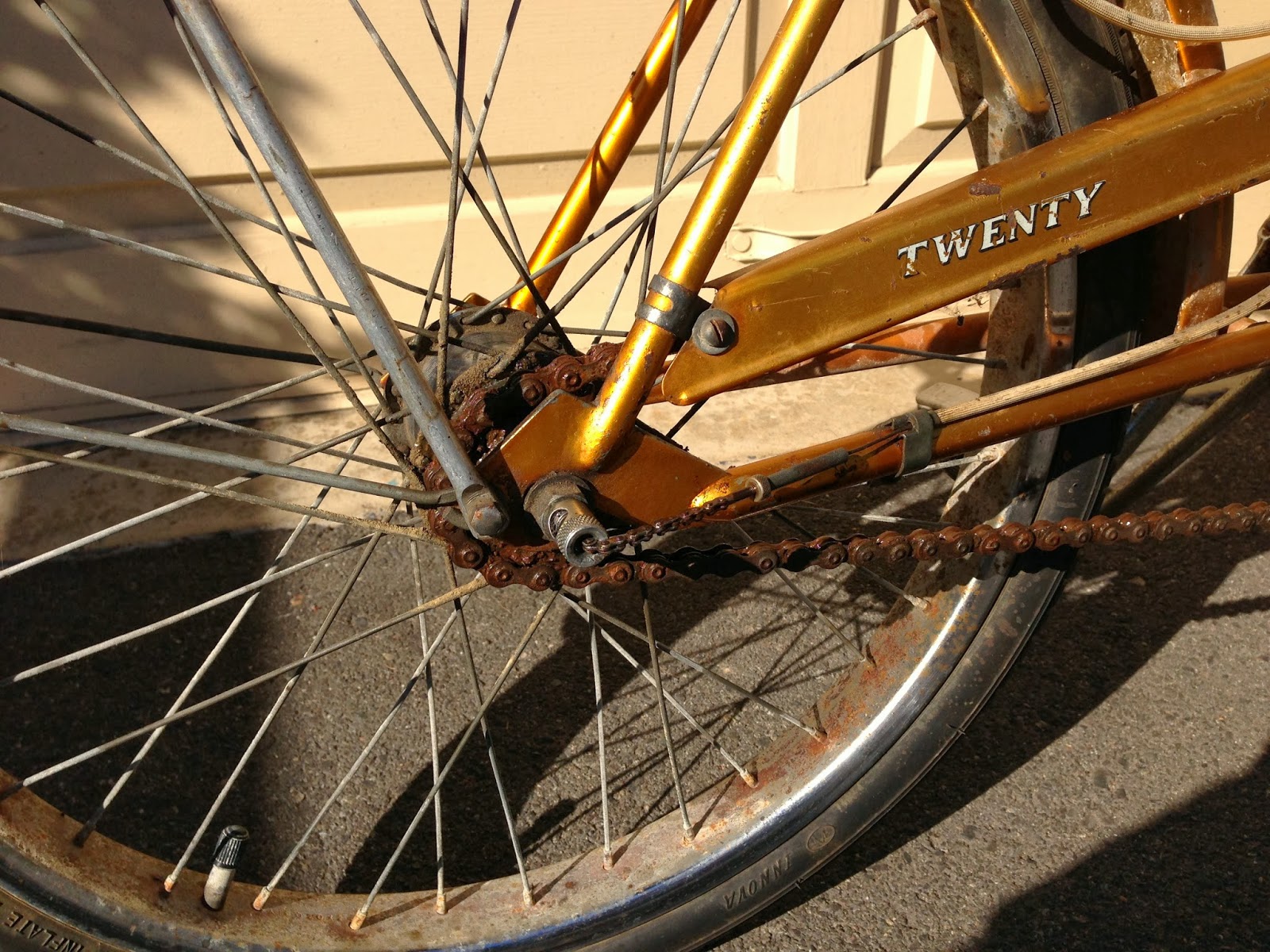 Needless to say, this is still a work in progress to get it cleaned up and running again.

Luckily, I have an extra front wheel in real nice shape.  I have worked out a deal with a co-member of the http://raleightwenty.webs.com site for a replacement rear wheel in decent shape, so that should take care of the wheels.  I had an extra seat post and passable saddle.  It's coming back together nicely.

As soon as I get some updated pics, I'll add them in.

So, what does all this mean?  I think I have ALL the colors of Raleigh (branded) Twenty's: Carmine, Blue, Green, Brown , White and Orange.  And with this one, a Phillips branded Gold one.  Seven Twenty's!

UPDATE: SEPTEMBER 27, 2013
This Gold Twenty is now done.  The rear wheel arrived from my pal grumpyoldsquid on the Raleigh Twenty site.  It was in decent shape, but since I had it out of the bike, I used it as my first Sturmey Archer teardown wheel.  See the guts HERE.  Once I got it all back together, it looks pretty sharp.  Rides pretty well too!  The paint is still pretty rough and there is some rust on the cranks that wouldn't come off, but overall, and particularly from a distance, it looks pretty stunning in Gold and Silver...  Here are some pictures of the final product. 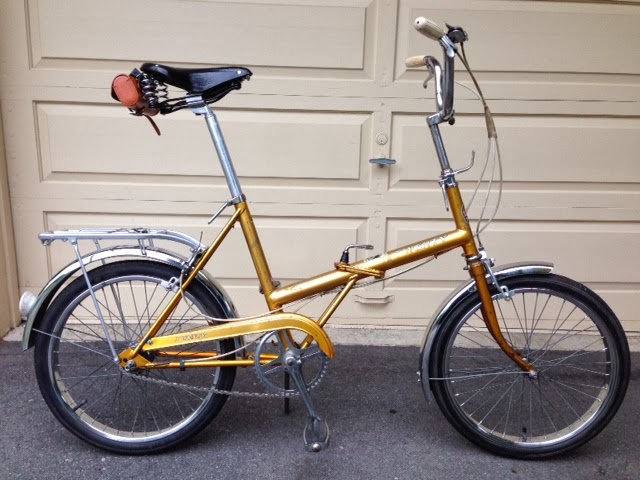 Here is the overall bike now.  The new wheels really make a huge difference.  Thanks GrumpyOldSquid!!  Originally, it had the high rise handlebars.  I'm not really a fan of these, so I put on a spare low-rise one I had laying around.  The original gold fenders were practically see through in many places.  Unfortunate, because they had the Phillips decal and these silver one sport the Raleigh decal.  But the silver really looks fantastic... 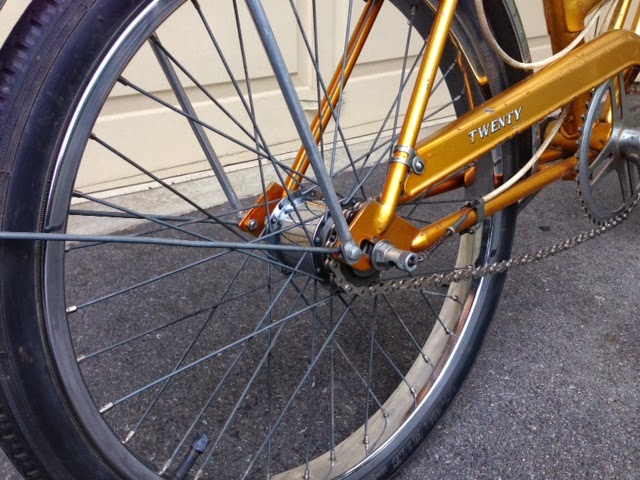 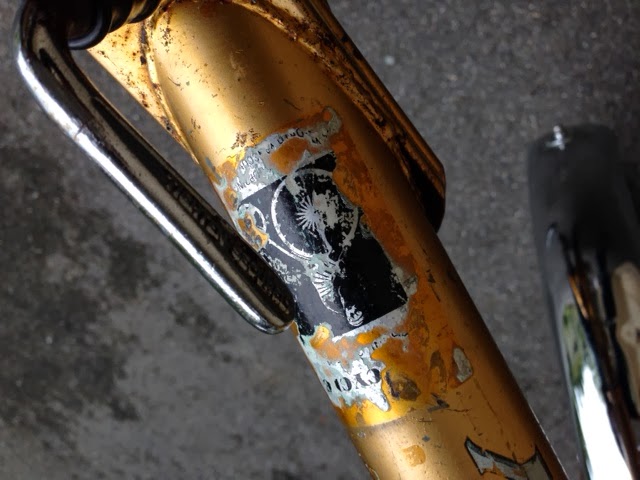 Like I said, the frame itself is pretty rough.  Here is the remnant of a sticker near the hinge.  I just left it for "cred."

charles
Posted by charles at 2:30 PM