Ever since I realized that there was a 16" wheeled version of a Raleigh RSW folding bike, I have wanted to get my hands on one.  I've now owned three Raleigh RSWs, two of them I've sold and one of them I still have.  But I've not come across a folding one, for a decent price, until just a couple weeks ago.  If you look around on eBay, nice versions of this bike are listed for sale in the thousands of dollars.  This one was listed as "non-functioning and very rusty" with a price to go along with that assessment… and FREE SHIPPING.  I was hooked and started calculating how many of my other bikes I'd need to sell to offset this one... 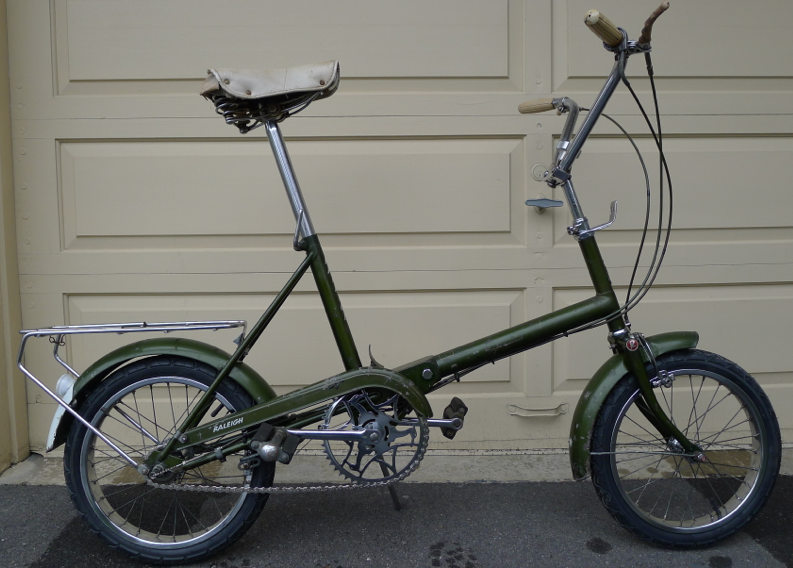 Here is a nice profile shot after I got her all put back together with new tires.  Yes… the picture is a bit dark… it won't stop RAINING around here! 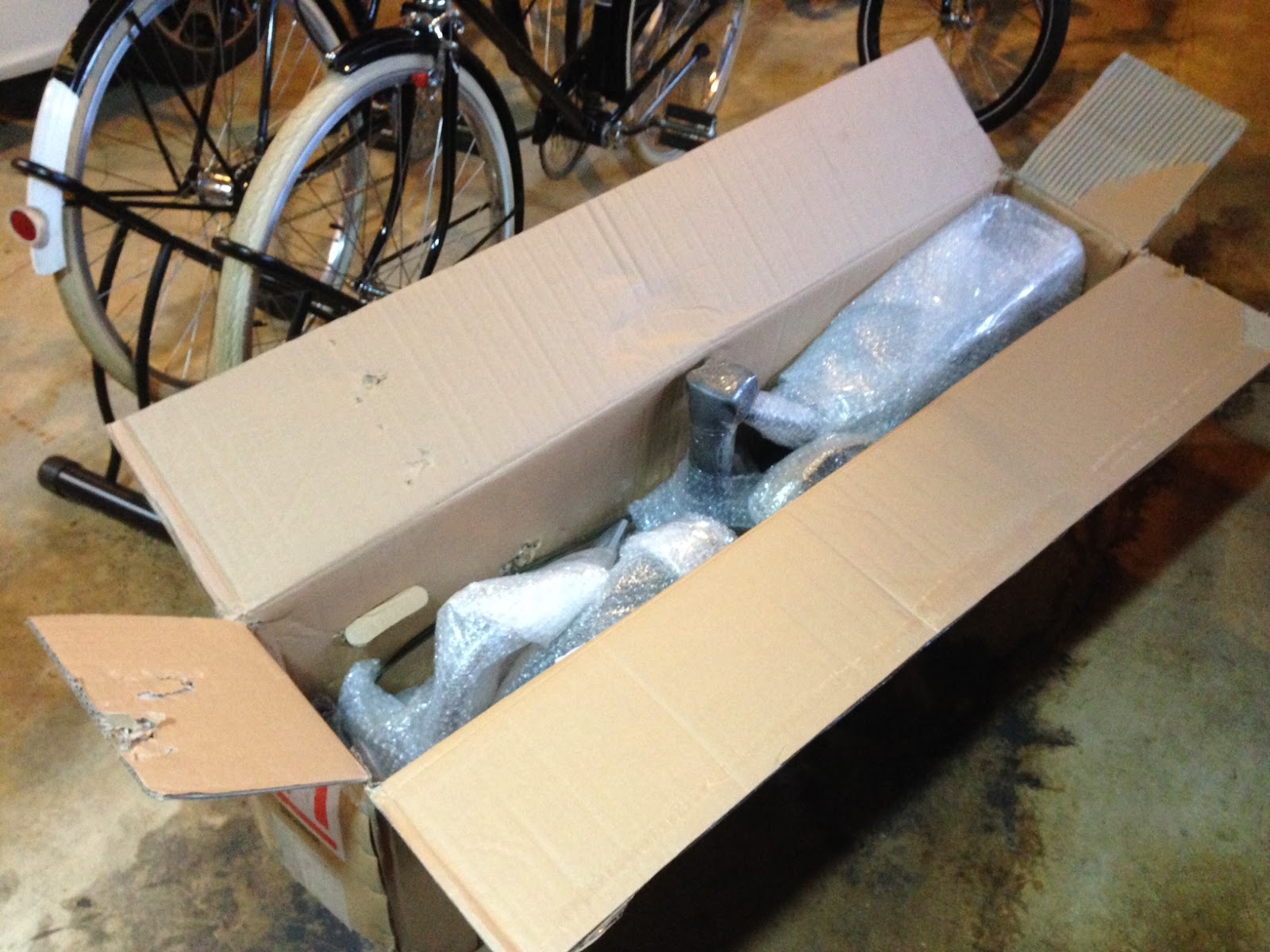 It arrived in two boxes, the first one contained the rear "carry-all."  The second box, pictured above, was the complete bike disassembled.  I have to say, the seller did a fantastic job packing this bike for shipping and it arrived in great condition. 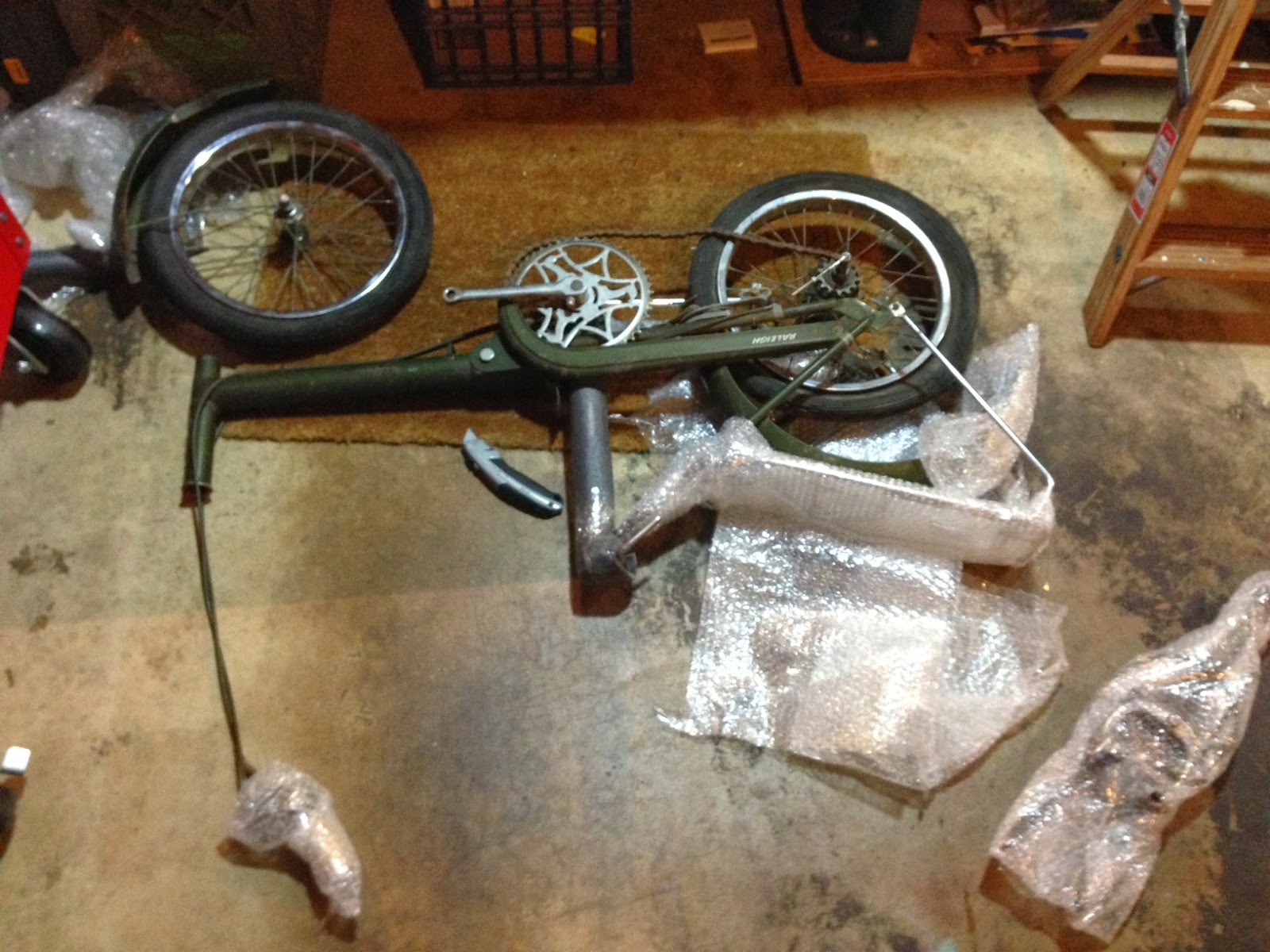 I started the long job of unpacking and peeling off the bubble wrap.  As I peeled off successive layers, all I could say to myself was, "whoa!  this bike is in pretty good condition!"  It also smelled strongly of hay.  A true "barn find." But the wheel rims, wile a bit dirty were rust free!  Same with the cranks and chainring.  The frame itself had the typical "love marks" from many years of existence, but nothing horrible.  The only part that looked rusty was the handlebars.  Unfortunately, these would be impossible to find replacements for.  I hoped they'd clean up OK...

Once I got it unwrapped, it took me about a week to get it all back together.  I rebuilt the SA-AW hub which was in surprisingly good condition internally.  Same with the front hub, headset and bottom bracket.  I have been using a product called Krud Kutter for rust removal recently and it does a great job.  The handlebars were particularly rusty and this treatment of Krud Kutter and a light rubbing with steel wool after it soaked a bit was amazing.  The rest of the bike got a complete polishing with Number 7 Rubbing Compound and two coats of Turtle Wax on everything after it was cleaned up.  I then started re-assembly. 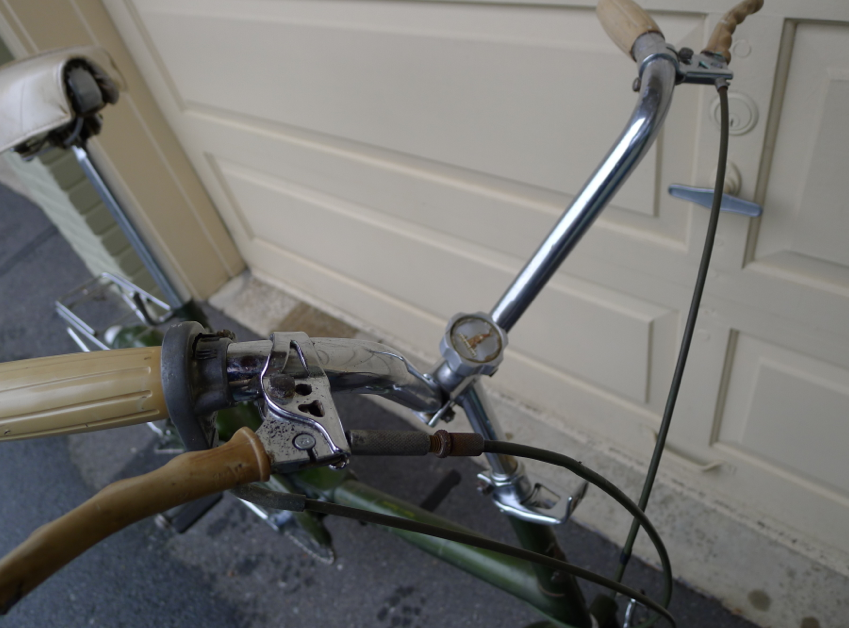 The handlebars on these bikes fold down after unscrewing the large plastic knob in the stem.  It works very well.  I typically like to replace cable housings, but these are a vintage olive green, so I kept them and just replaced the cables. 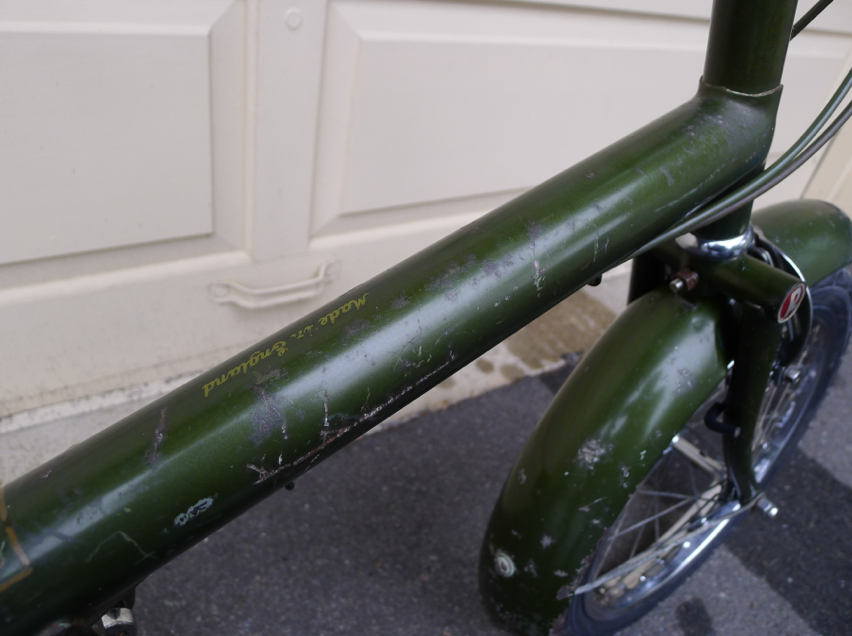 The decals are in pretty good shape.  On other examples of this bike I've seen a decal on the down tube that says "RSW Compact."  This one does not have it and I see no remnants of a prior decal.  Wonder if these early examples didn't have them?? 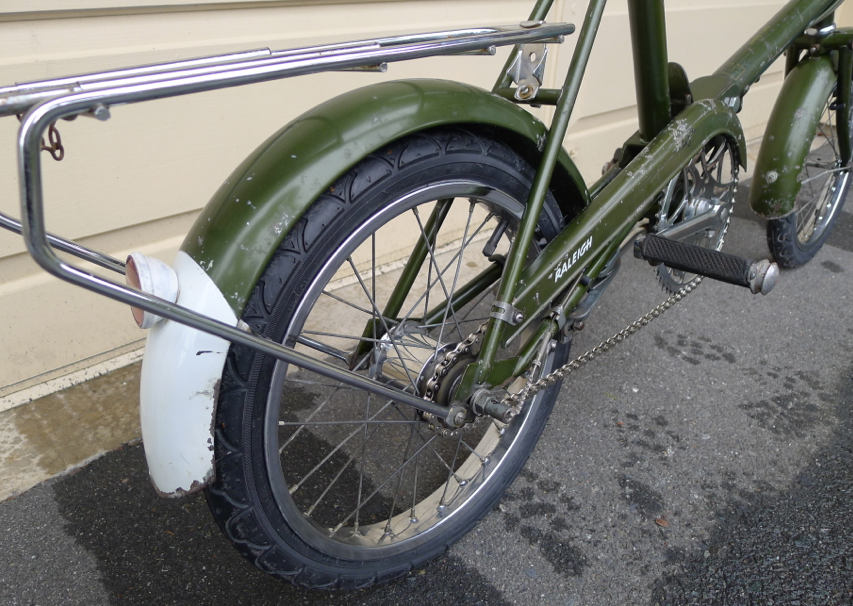 Someone replaced the indicator chain in the SA hub (which is dated 10-66).  The chain was shot so on went a new 1/8"  The integrated rack features a sliding mechanism that attaches onto the carry-all.  The slider is typically rusted tight.  Not this one!  it actually works very well.  Also, I know I had a question about the prop stand for my other RSW (which is missing it)… is it the same as the Raleigh Twenty?  The RSW prop stand is 9.75" from the bend at the bottom to the bend at the top.   R-20 is the same! 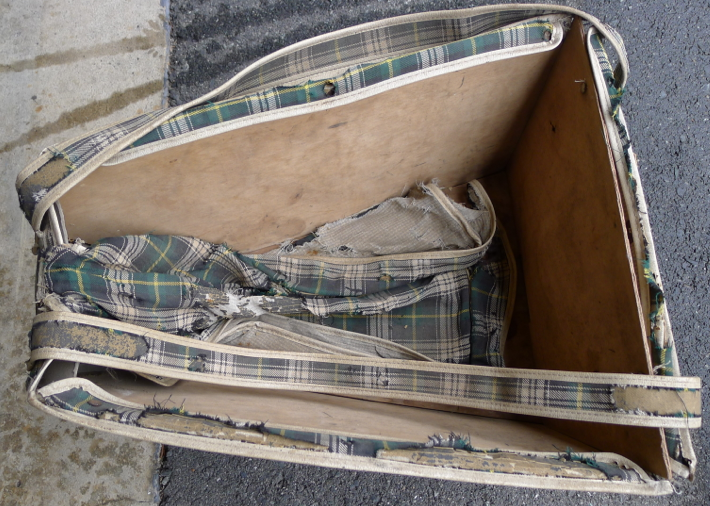 Now for the bad news…. the bag.  The carry-all is in extremely bad shape.  The top cover is rotted through and the cloth is pretty tattered all over.  Rivets and hardware are rusted…

But, silver linings, the basic frame of the carry-all is still intact and not broken up.  All of the parts are there too.  I took a bunch of pictures of the original bag because you just don't see details of these on the web. 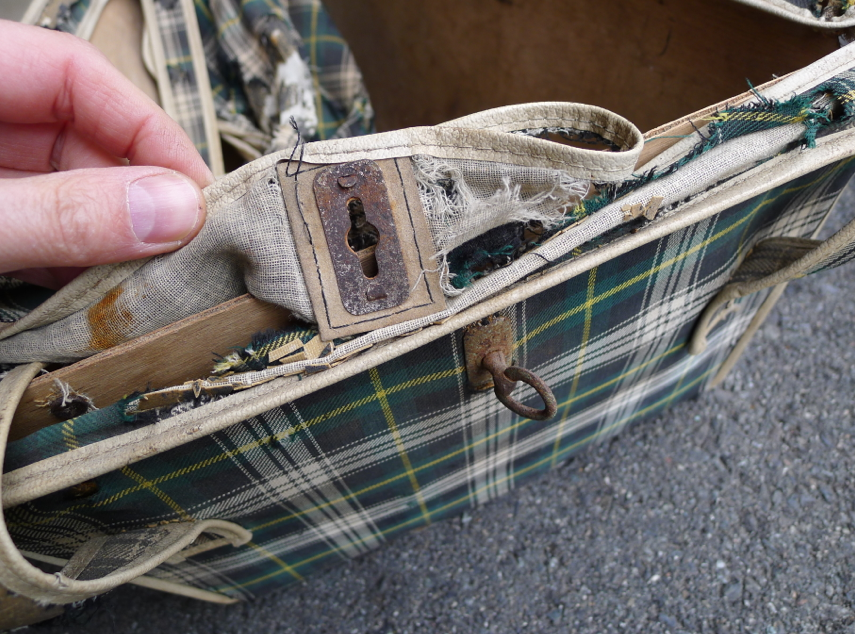 Here is a close up of the latch mechanism.  These two metal pieces are attached to the fabric with pass-thru tabs that are folded over on the back side.  The fabric is re-inforced in these spots with hard vinyl to prevent them from pulling through.  They should be easy enough to remove and re-use in a refurbished bag that I am going to try and have done.  The edges of the bag are all stitched up with a vinyl piping.  The handle straps also have a hard inner material to give them strength, 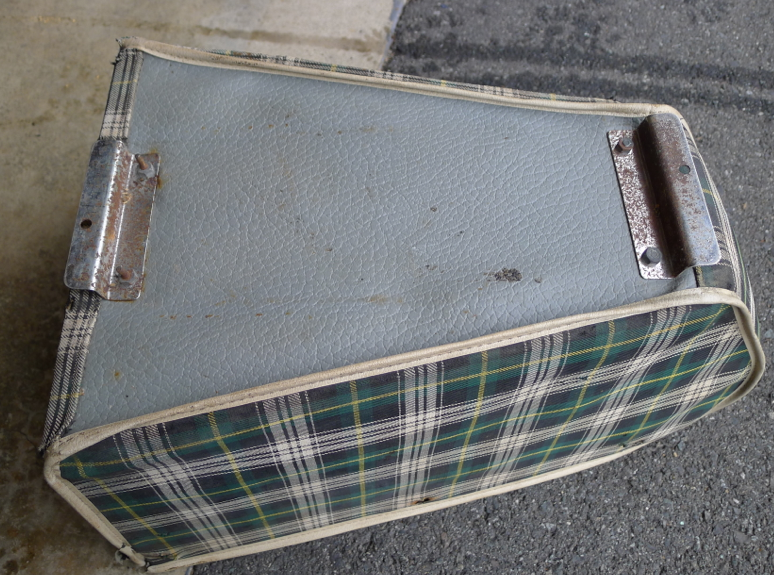 The bottom of the bag is gray vinyl.  You can see the two metal brackets that snap into the rack on the frame.  A bit rusty, but if my experience with Krud Kutter holds try, they should polish right up. 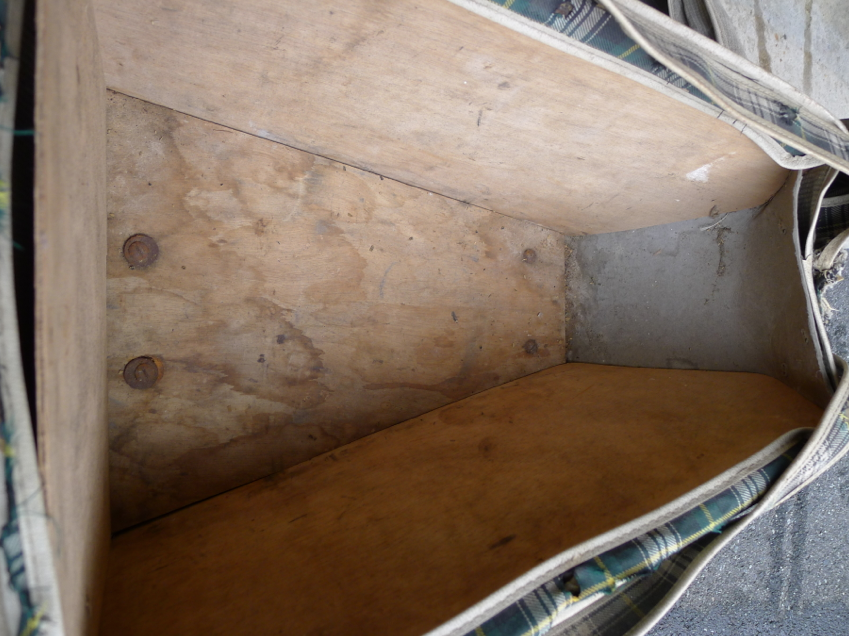 The inside of the carry-all is made of very thin, 1/8" plywood.  There is a rounded section in the front made of a durable cardboard.  You can see the bolt heads that pass through to hold on the brackets on the bottom.  The fabric of the bag is held in place by rivets in the cloth that is folded over on the top.  . 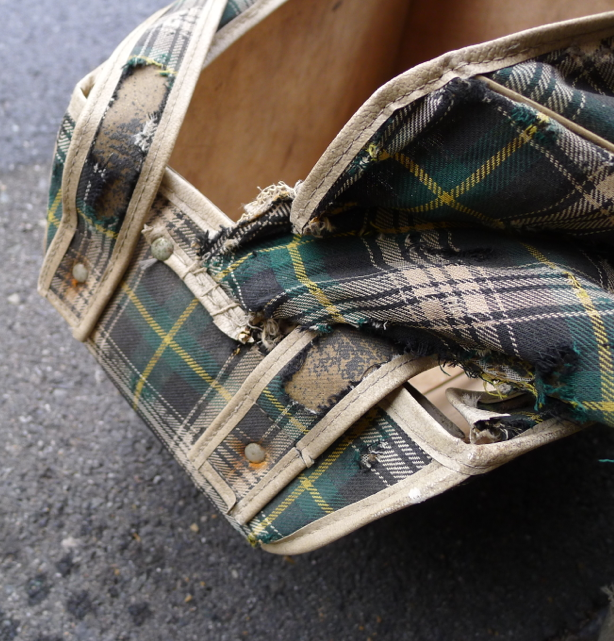 At one point, it looks like the top cover finally ripped loose.  Someone in the past has tried to stitch it back on and did a real cock-up job of it. 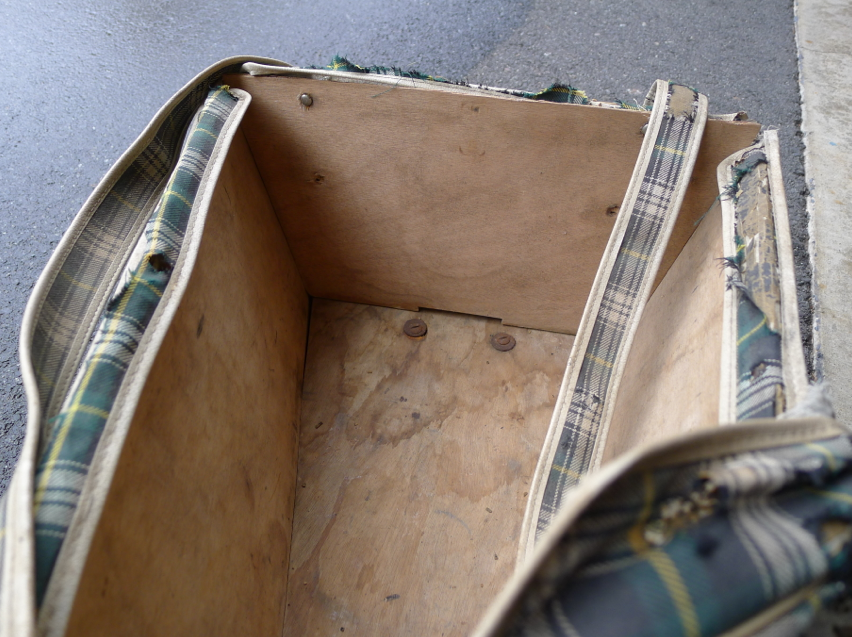 Here is a final look at the bag from the front toward the rear.  You can see the straps are wearing through to the harder stiffening fabric below in many places.

So.. that's it.  My plans for this one are to get the bag remade.  My folks have a friend who does custom upholstery work, or DID.  I think they might be retired.  But this is a pretty small job and I'm hoping that they might take it on.  I also want to see if I can get a custom fabricated steering tube extender made for this bike.  I have a Kalloy seatpost that gets me to the right height, but I have to lean over pretty far to get to the handlebars.