Looking back over this blog for the last couple years, I've noticed a trend.  I have a big thing for small wheeled and folding bikes.  The Raleigh Twenty started me off and since that time I've dabbled with Raleigh RSW's and have a couple Brompton's that the wife and I get out on when traveling.   So it wasn't too much of a surprise when I came across a Batavus Intercycle "Batafold" on the local craigslist the other day and the first thought across my mind was… "whoa, that is pretty wild looking."  The next thought was "I wonder how much trouble I'd be in if I got it?" 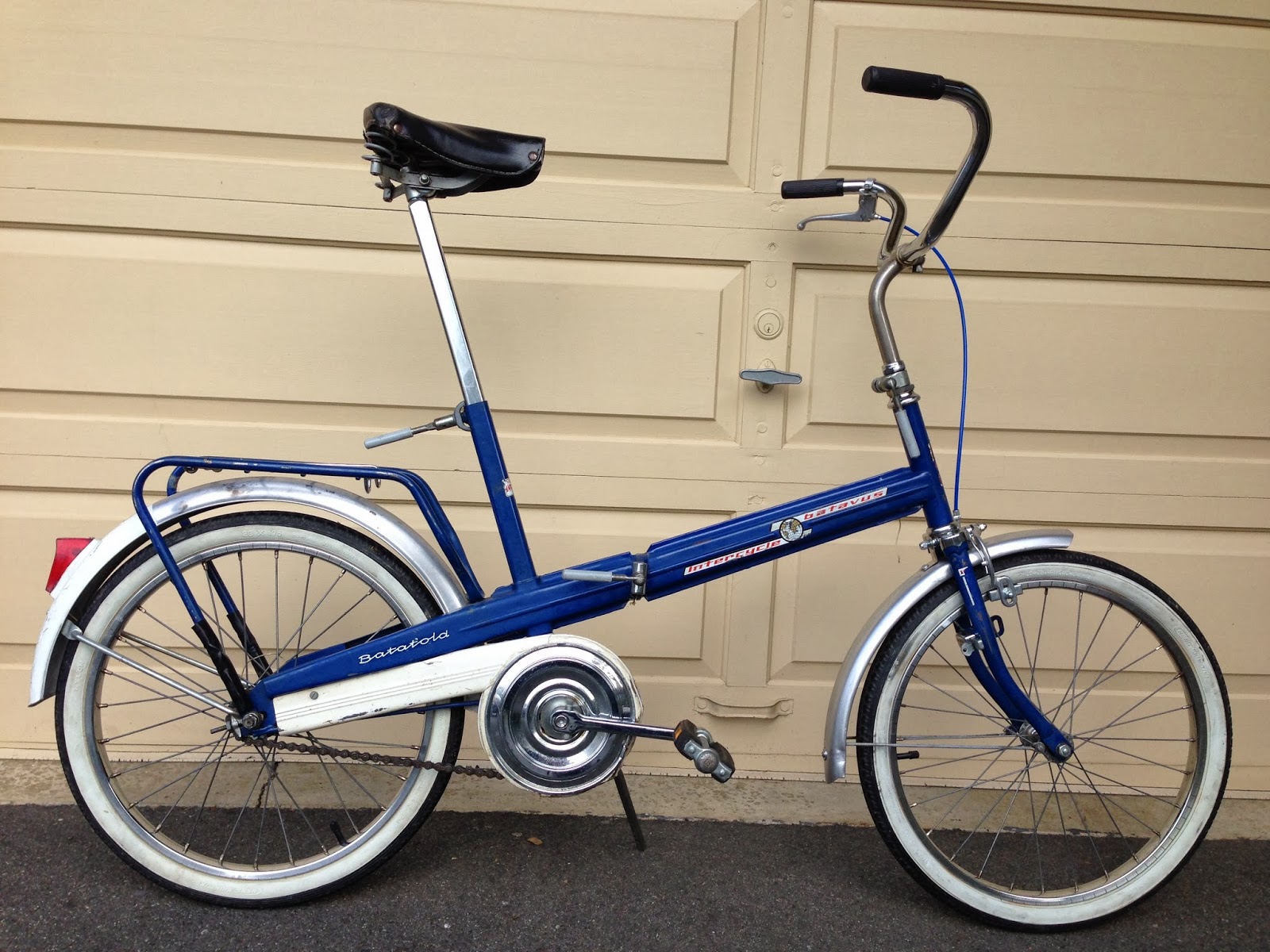 This is the bike.  I picked it up from a very nice gal who, along with her husband, owned a bike shop nearby.  They are both semi-retired and still do a lot of work with bicycles, mostly vintage mixte and road bikes.  This bike was bought for her son who was a lighting engineer for a local indie-rock band (Fleet Foxes) and this bike helped save him legwork while setting up shows.

The Batavus was a product of Holland.  This bike is unique in that it uses (for the most part) square tubing.  The main frame is actually folded heavy sheet metal that is welded along the bottom of the tubing seam. 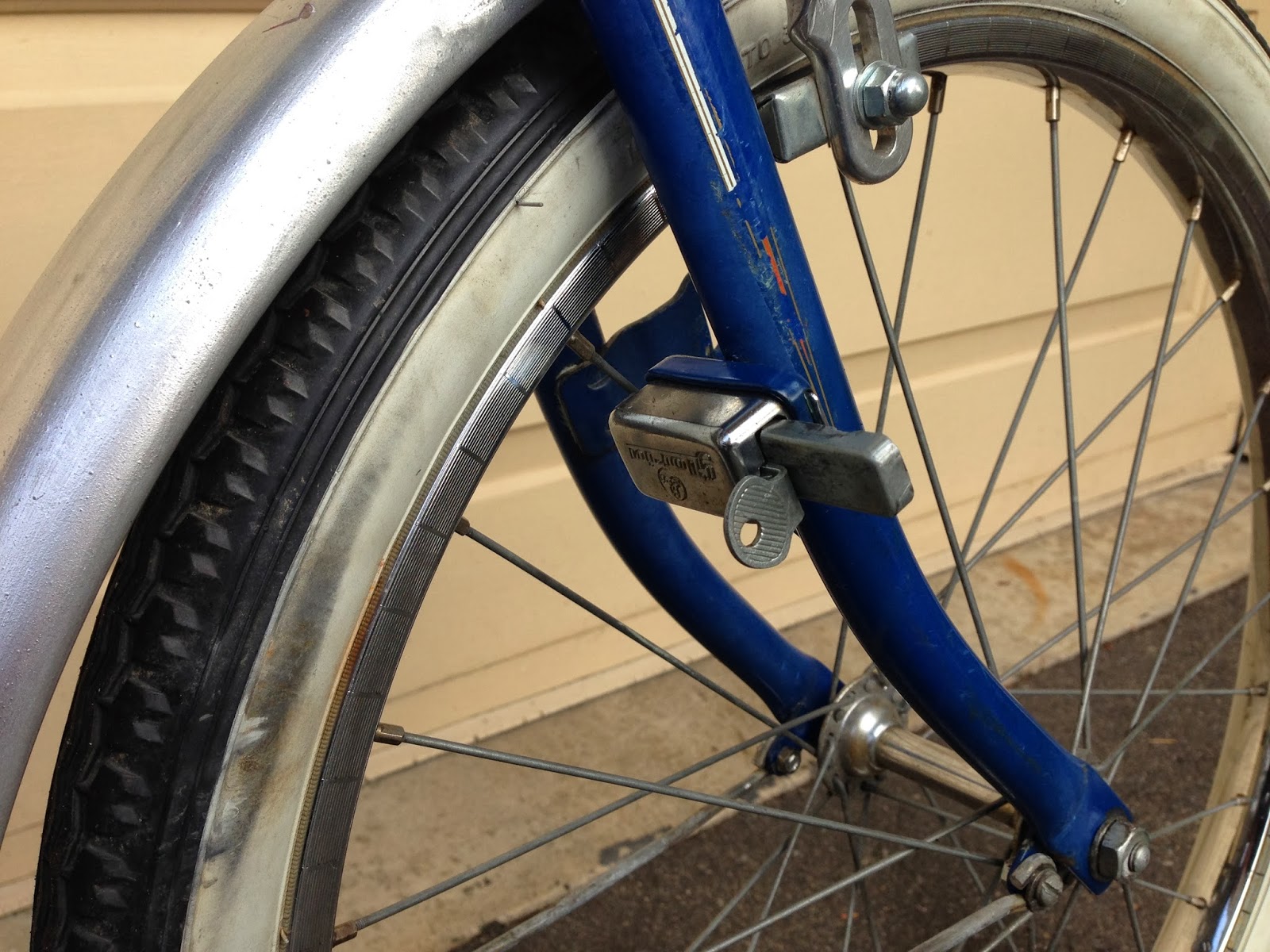 This bike has a few unique bits to it.  There is an integrated "lock" mechanism on the front fork.  The photo above shows it disengaged.  There is a key which is bent at a 90 degree angle to the lock bar.  It does not come out when the lock is disengaged.  To engage the lock, you push the lock bar into the spokes.  It will click there and stay.  At this point you can remove the key.  To disengage the lock again, insert the key and give it a push.  the lock bar will snap back to the original position and the key is now set.

On the other side of the bike on the fork is a plate that had a bolt on pop-bottle generator that powered the lights, front and rear.  This generator is missing on this bike.  I'm on the hunt.  Also, the fender on the front is not the original.  I made it from an old Raleigh Twenty rear fender that I cut to shape and painted aluminum. 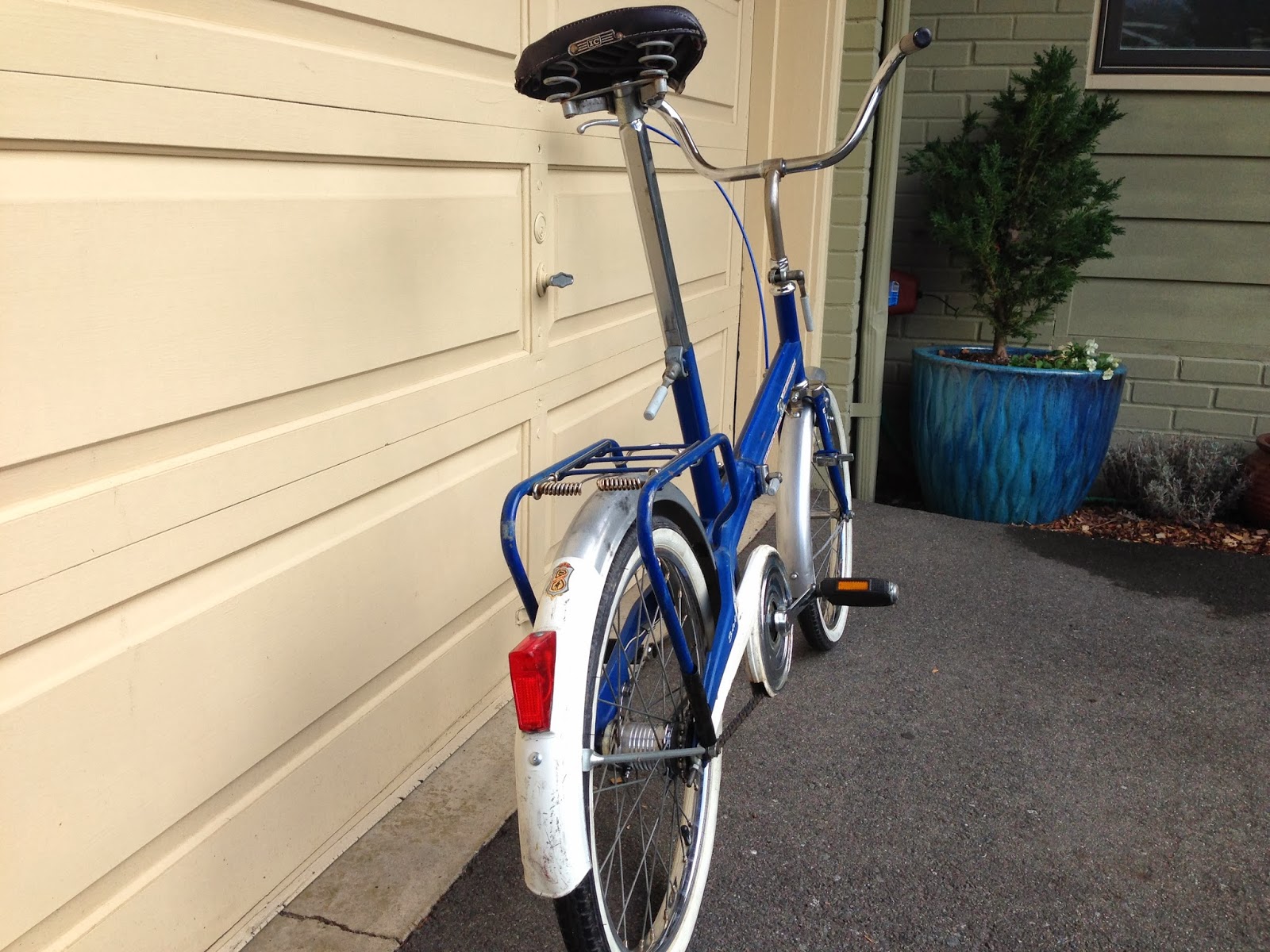 The rear fender is original and made of aluminum.  It has an integrated light on it.  The seat post is square.  It is CRITICAL that the seat post stay lubricated.  If it seizes in the shaft, you can't spin the post to free it.  The clamp system for the seat post is unlike anything I've seen before.  There is a "U" shaped bit of metal that tightens down onto the seat post (on one side) and fits in a slot in the frame on the lower side.  As you tighten the clamp, the upper part of the U just pushes into the seatpost and wedges it there.  Not the most stable of systems and you need to reef on it pretty tight to keep it from slipping.

The rear rack is integrated, but has come loose in this example.  To re-attach it, I'll need to remove the rear fender which has all the wiring integrated into it.  The chain cover is actually attached to the frame by the fixed bearing cup of the bottom bracket.  The chain guard is pretty mashed on the front under side… I guess it'll stay that way!

I've already put about 20 miles on this bike.  The folding mechanism scares me a bit.  The clamp does not sit very snug and it seems like a good bump at high speed would basically separate it.  So I don't go fast or hit bumps!  I need to see if there is a reason the clamp is so off.  It seems like the frame hinge may have been bent slightly at some point so the two halves don't sit flush.  This bike may end up just being a curiosity hanging off the garage ceiling.

Anyone else have info on these?