As I mentioned a couple posts back, I find myself becoming more and more enamoured of small wheeled shopper and folder bikes, particularly from the 1960's and 1970's and of British origin.  With that said, you can't even begin the discussion unless you include The Moulton.  Originally conceived in 1962 by Dr. Alex Moulton, it was the bicycle that started it all.  There are plenty of websites out there that doument the history of this bike, so I won't repeat it all here.  What I can say is that, in terms of innovation, this bike really changed what it meant to be a bicycle.  Since the time of the demise of the "penny farthing" big wheeled bicycles and the creation of the "safety bike" that had a diamond frame and two equal sized wheels, no real significant innovative changes had been made to the bicycle.  As a person who values innovation, I really credit Dr. Moulton for making a very big step here.

These bikes are very hard to find, at least here in Seattle.  I was surprised and very excited to see one pop up on the local Seattle craigslist.  The seller was looking for a "best offer," so I did my research on eBay and put forward my best number.  It was more than I usually like to spend on an old bike, but this one is something a bit special, so I emailed him and crossed my fingers.  After a few emails, we met up in person near Boeing's massive plant/factory in Everett, WA.   We met in the parking lot of a non-descript office park nearby, chatted for a couple minutes and then he pulled this out of the back of his SUV…. 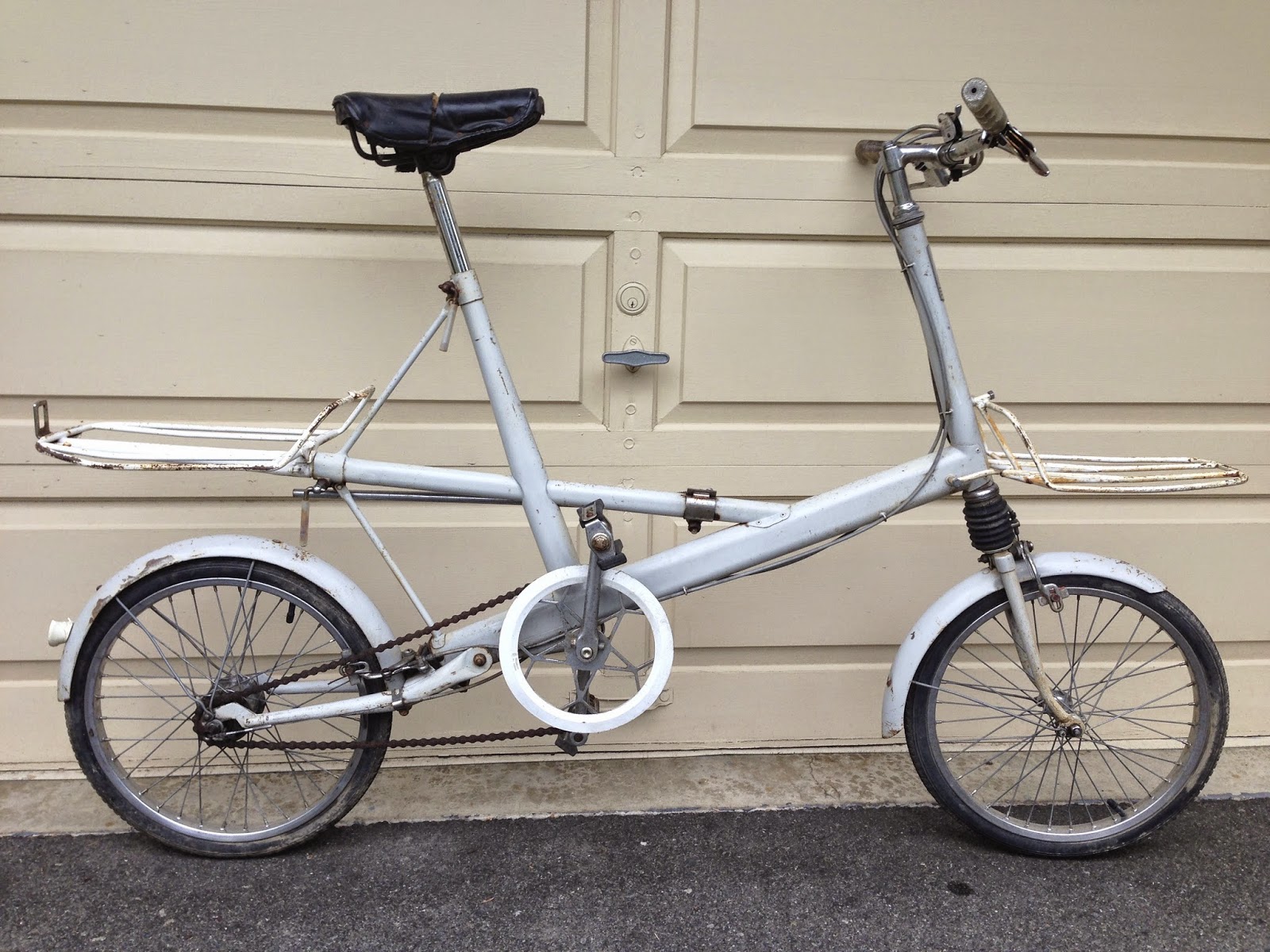 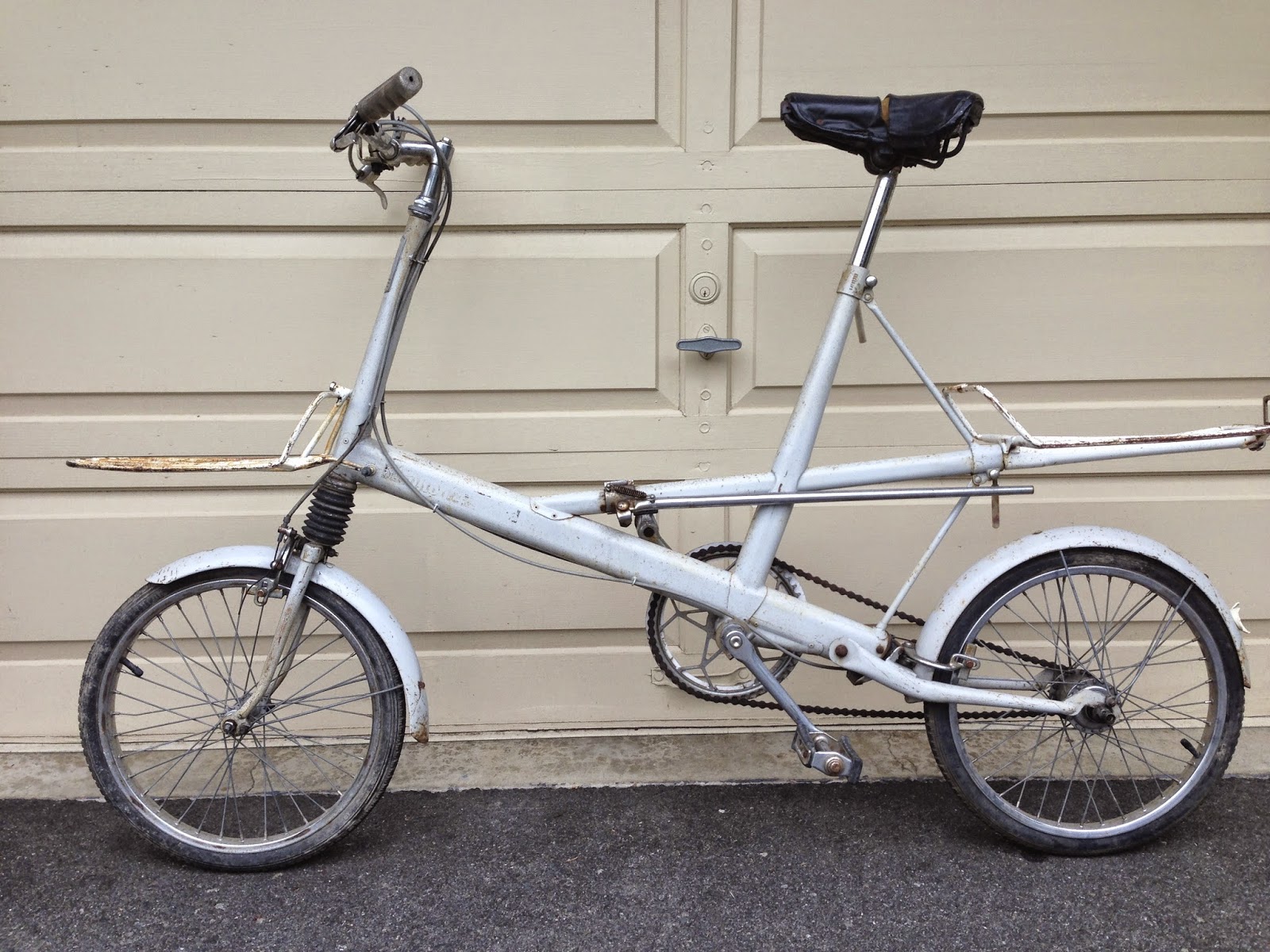 …an all original Moulton F-Style 4 Speed!  My initial impressions were that it was in real good condition for a 50 year old bicycle.  There was rust, but none that seemed too deep.  The rubber bits on this bike are critical and near impossible to find.  These all looked in great condition.  Original tires have some cracking, but still hold air.  The Sturmey Archer FW 4-Speed hub was not functioning well. I didn't really want to try riding it for fear that I might break something inside.  I was sold.

The story behind this bike is practically more interesting than the bike itself.  Many years back when my seller was just a boy in a nearby small town, he had an elderly neighbor whose house burned down in a fire.  The boy's dad spearheaded the effort to rally the community to re-build his house.  After it was re-built, the elderly man told the father that he didn't have any money to repay him.  Of course the father waived off the offer as un-necessary.  The elderly man looked at the fathers two sones and said " I DO have something for you two…"  He proceeded to walk out into the middle of a field, the boys trailing behind.  He removed a large clump of brush to reveal a 4x8 sheet of plywood lying on the ground.  He slid it away to open a vault he'd dug in the field and in it were two bikes, brand new.  He gave this F-style to my craigslist seller as a gift when he must've been around 6 years old.  It was his childhood bicycle until the day he stashed it in his fathers house and it sat until a few weeks back.

I love that story!! 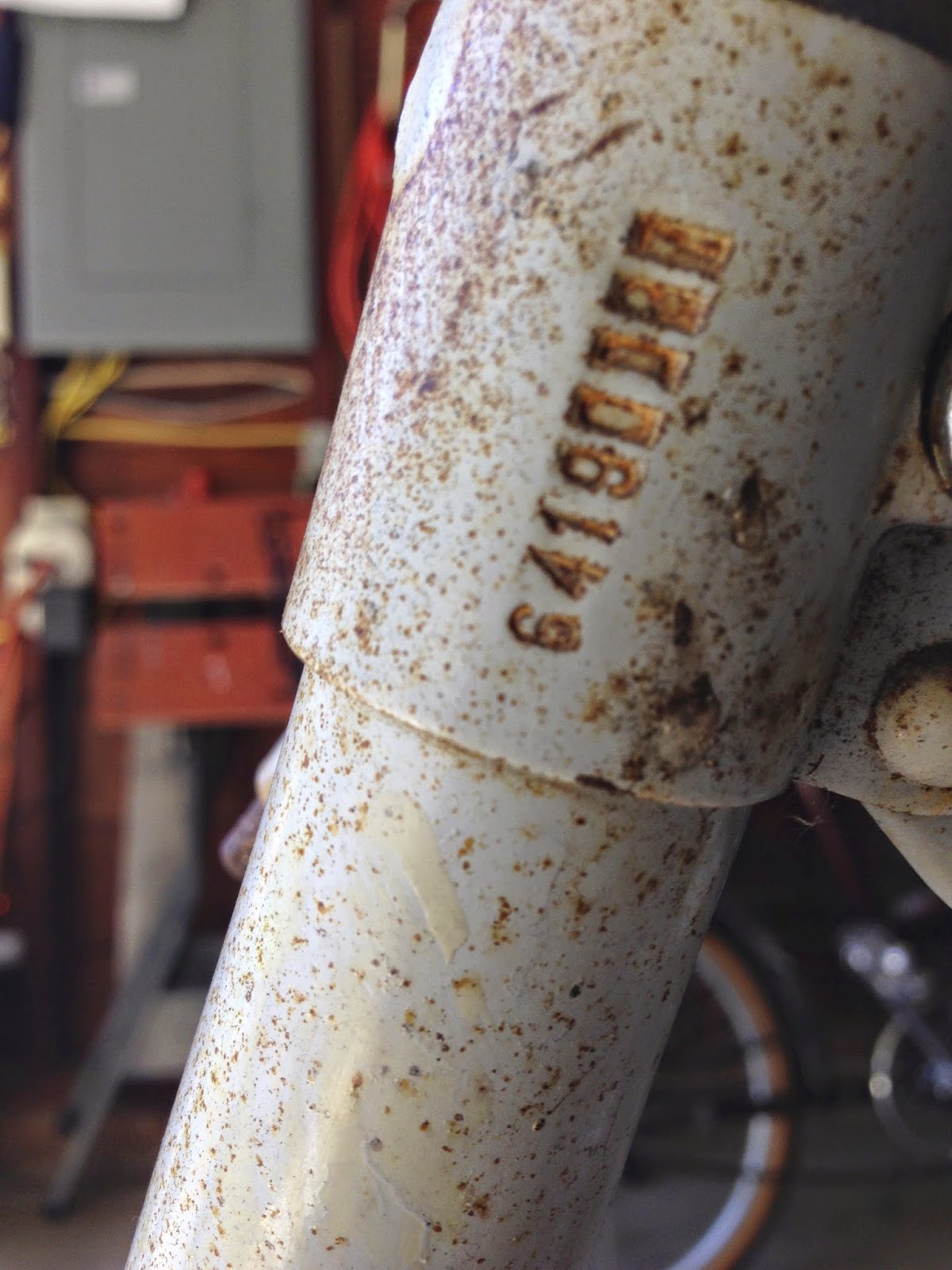 Serial number 64190087.  I'm imagining this means "1964" transposing the first four digits and number 87 off the production line that year.  I'm not sure what the production runs were in 1964, but this was an early example for the year.  The Sturmey Archer hub reads 6-64, so you'd think it would be after that.  I suppose that the frame could have been constructed early and sat around for a while, wheels added later…. 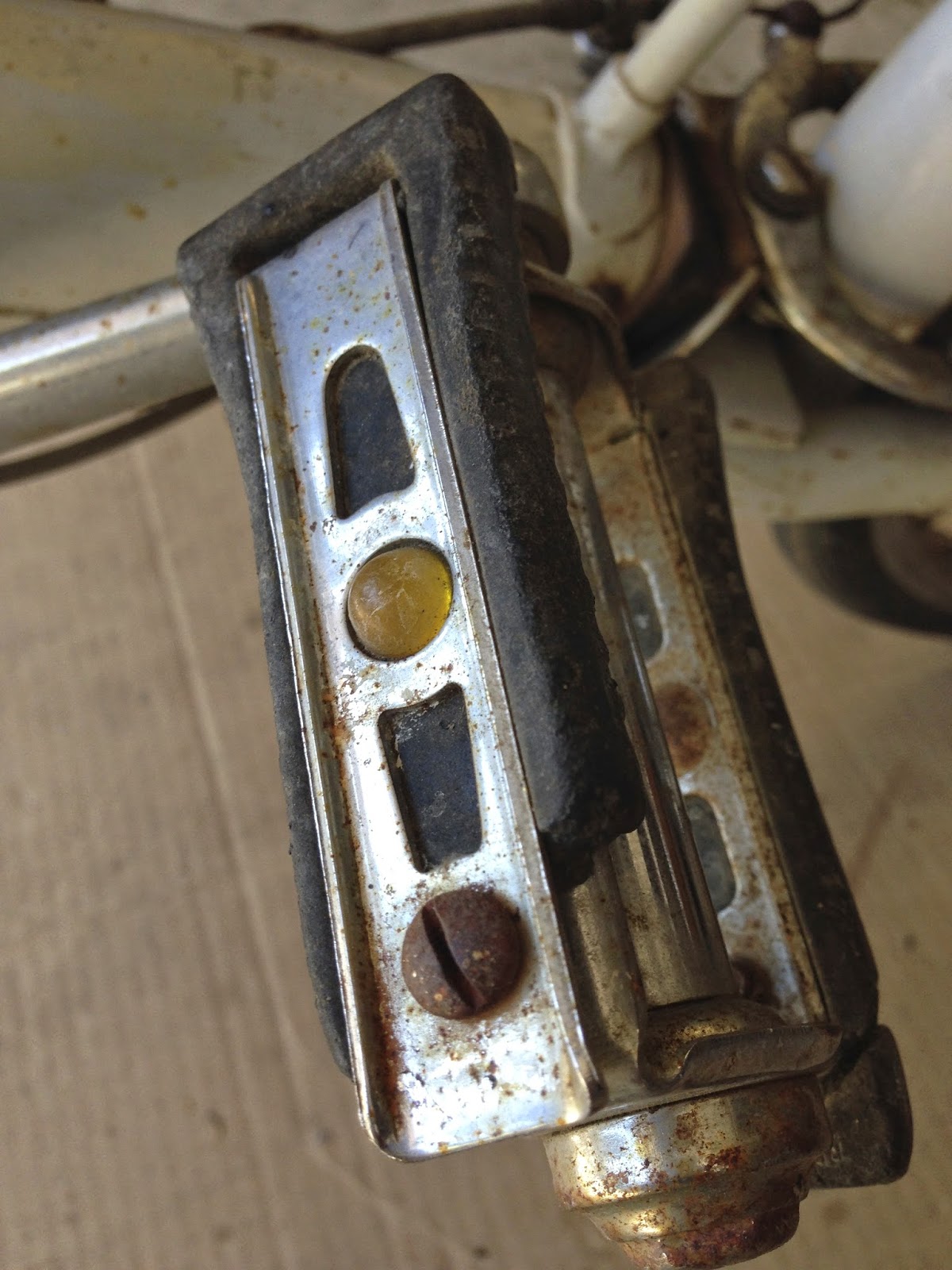 Very unique pedals, unfortunately damaged pretty bad.  The rubber edging has been ripped away on both sides, probably from pedal strikes long ago.  The reflector is the small yellow "bead" in the middle. 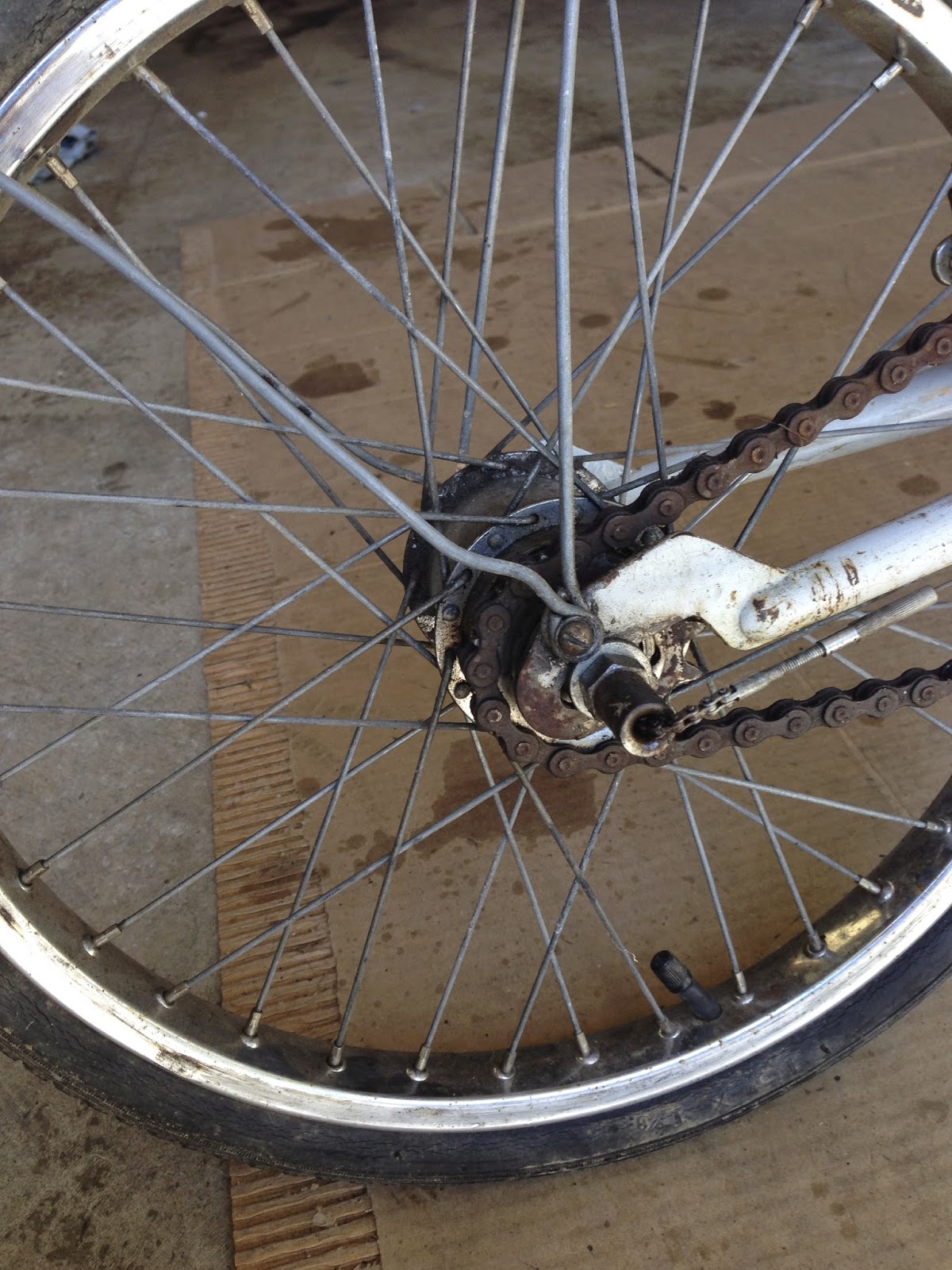 Rear fork is the "straight bar" type that were better designed to withstand cracking.  The lack of seat stays allows the chain to be removed for service and cleaning without breaking it in half!  Hooray!!  At this point the hub is a big question mark.  Can it be repaired?  Stay tuned… 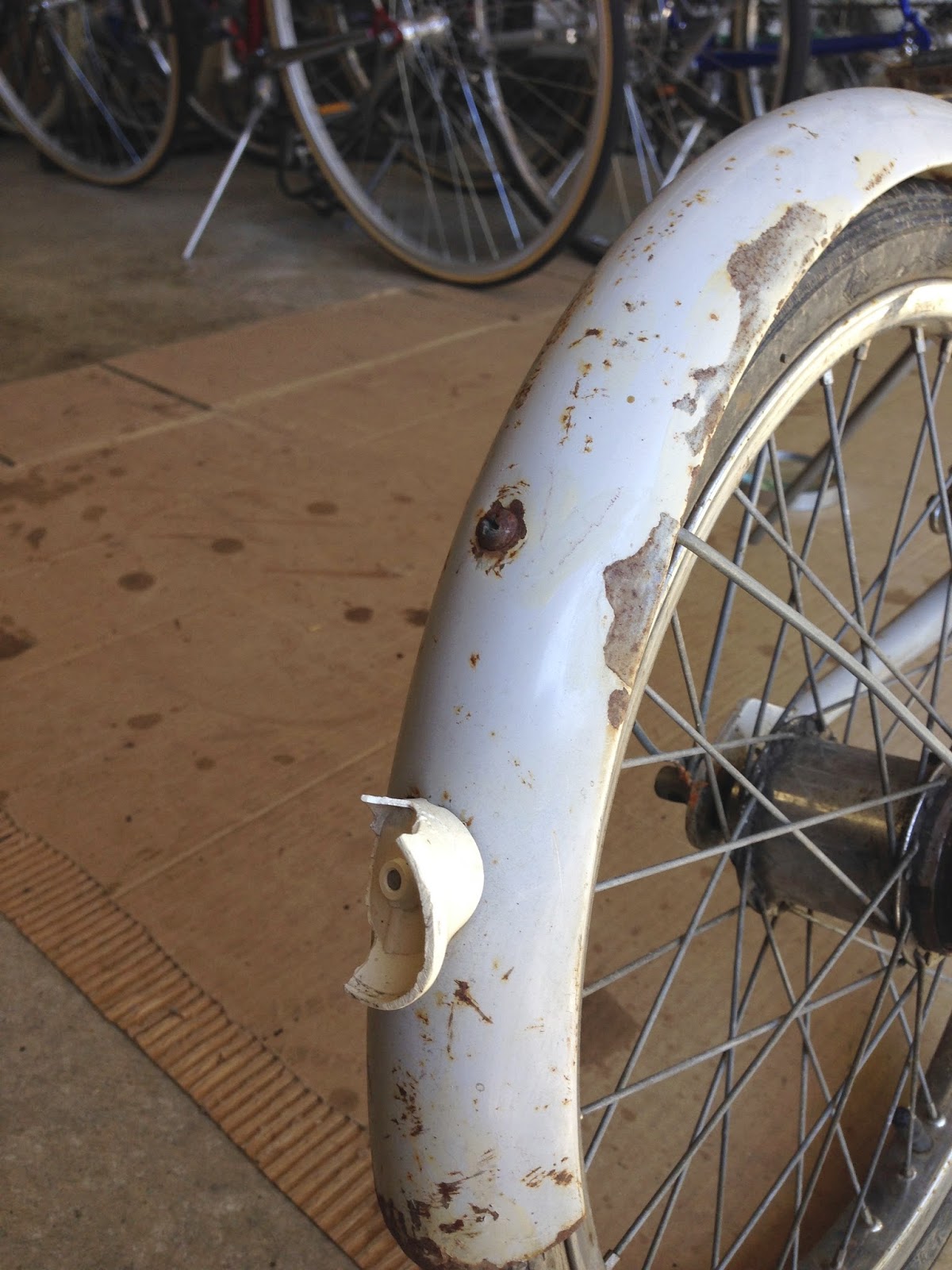 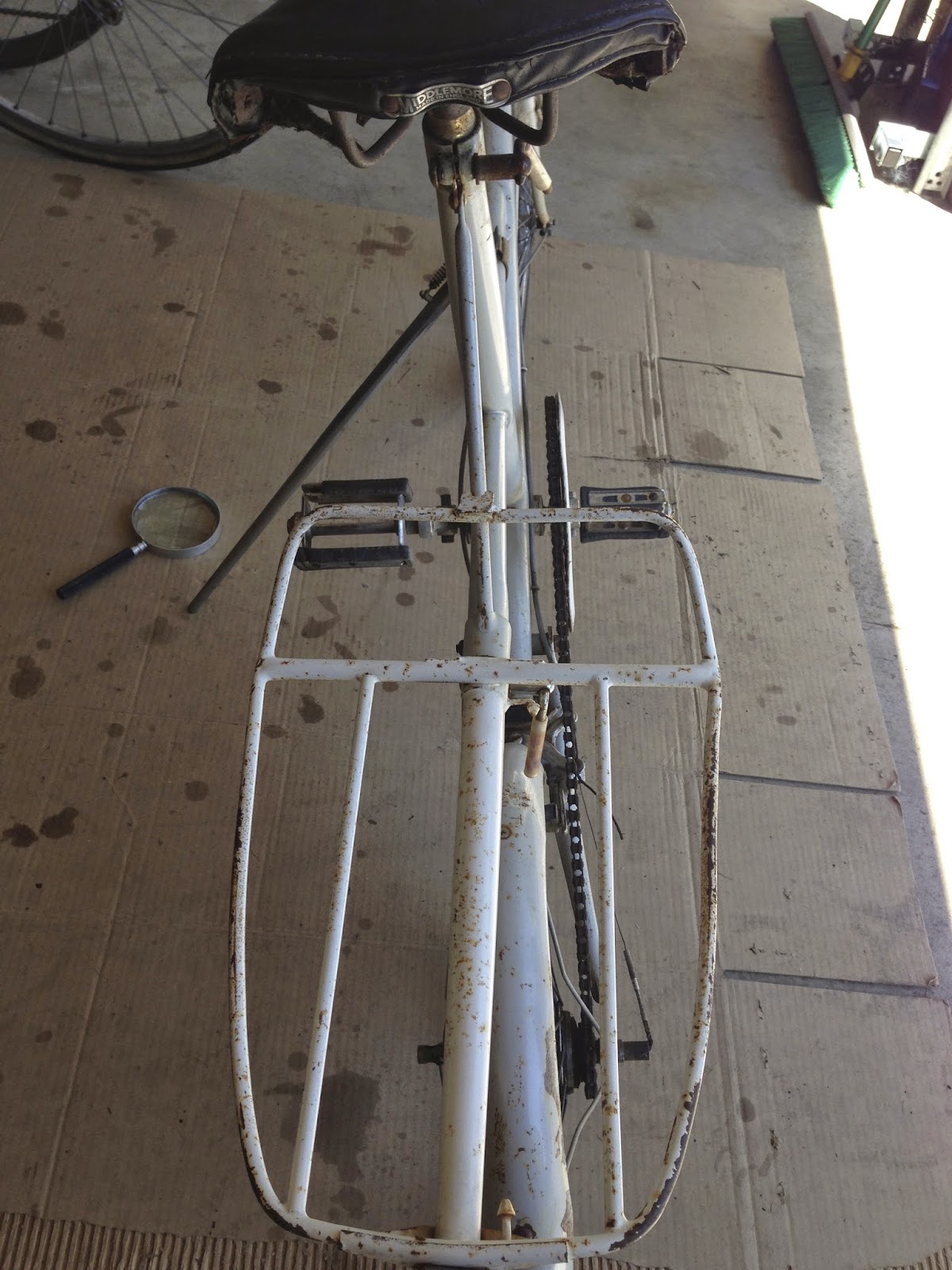 OK, this is probably the biggest fault in the bike.  As you can see from this photo, the rear rack is canted off to the laft side of the bike.  In addition, the rack bars themselves are bent down on the two right-hand bars,  Once I got the rack off (it integrates INTO the frame tube) it was clear that the bike took a pretty substantial hit on the right side (like a log dropping on it?) that bent the rack bars AND torqued the frame ever so slightly.  It did NOT crimp the metal of the frame anywhere, so I think it can be gingerly put right.  I have a scheduled appointment with Haulin' Colin in Seattle to asses the frame repair… 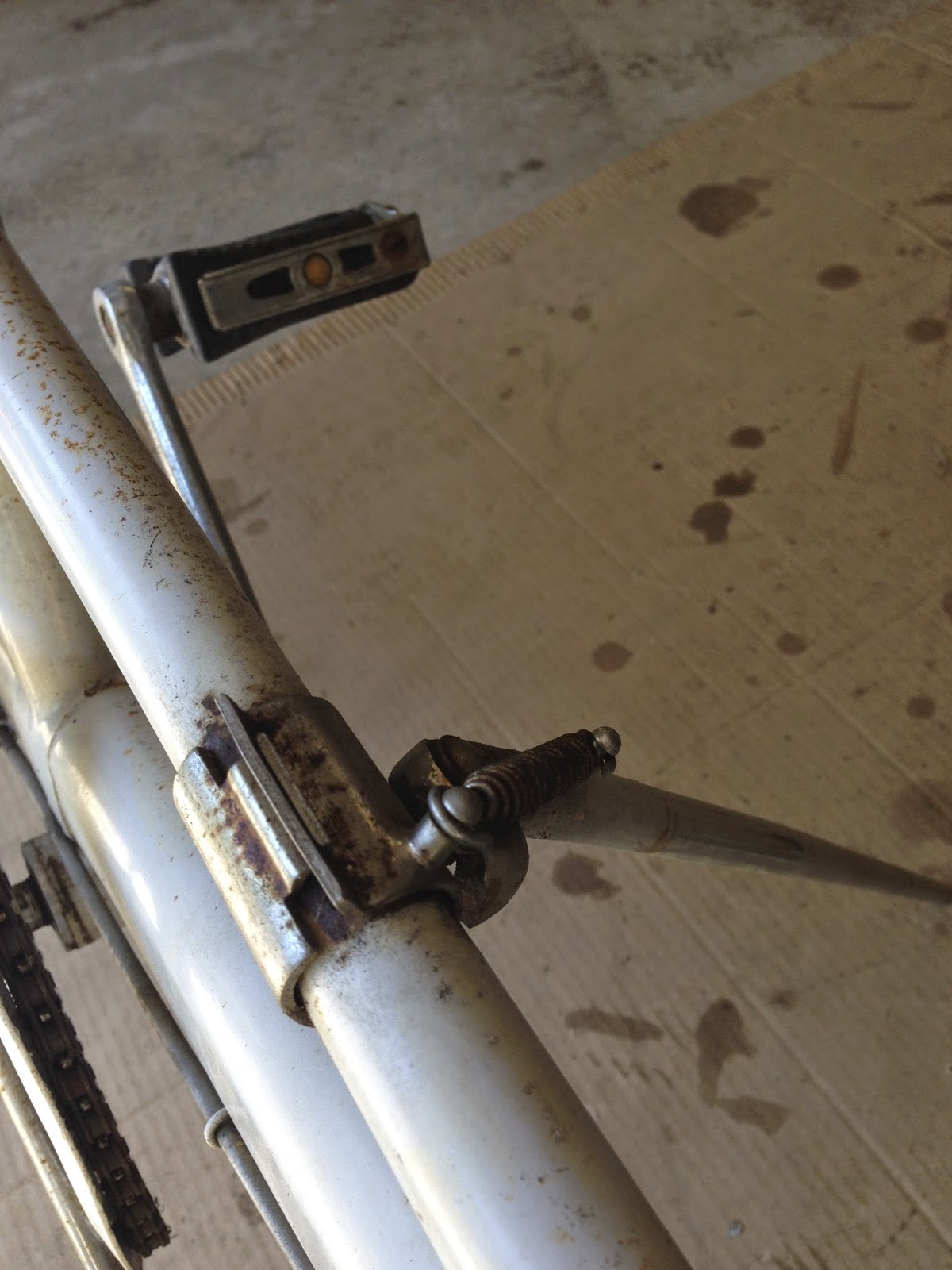 This is the original prop stand.  A frame mounted ultra-long bar.  The rust under this is pretty bad, but doesn't really pit the metal at all.  It is missing the rubber end cap, a pretty generic piece I may be able to source. 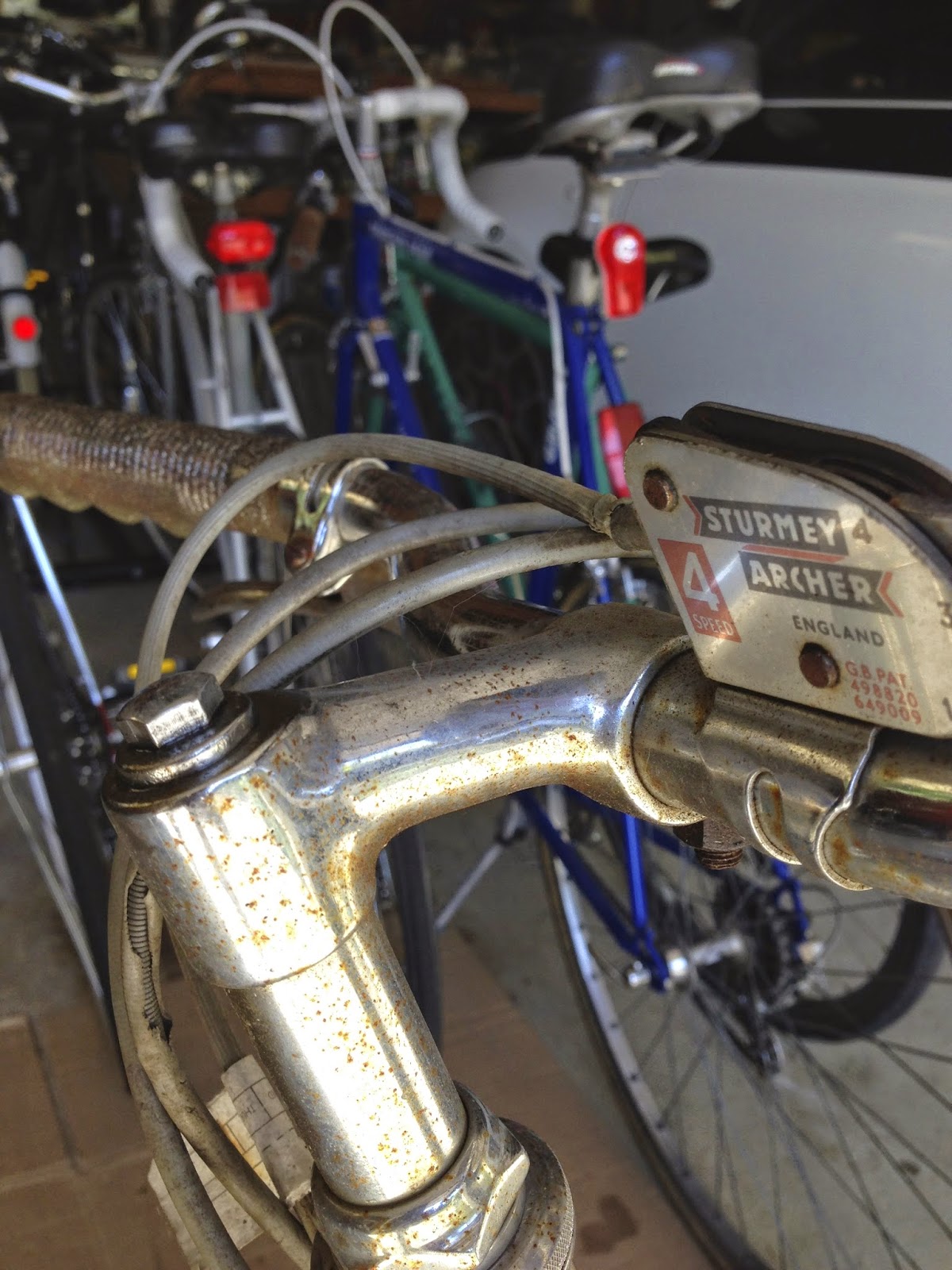 Sturmey Archer FW 4-Speed shifter and steel quill stem.  All the chrome is in spectacular condition and comes out bright with the most minimal of treatment with WD-40 and very fine brass wool. 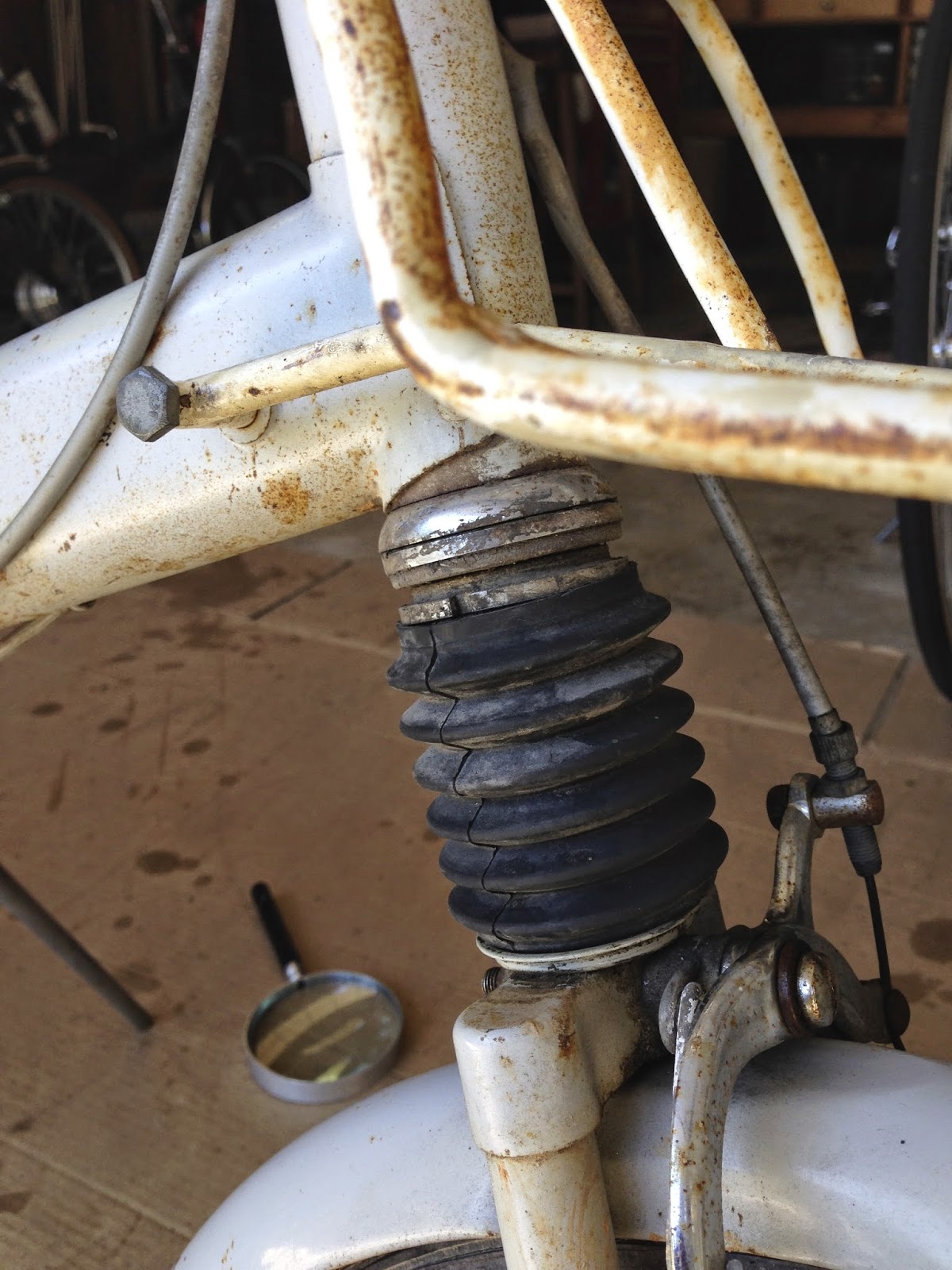 Here is the rubber bellows on the front fork.  These bikes have a complicated inner mechanism to provide shock absorption in front and a rubber damper in the rear.  This part is in great shape.

Here is the rear damper.  The bike uses pop rivets to hold things together and I had to remove four of these to get the rubber damper off for powder coating,  I hope I can get it back on again… 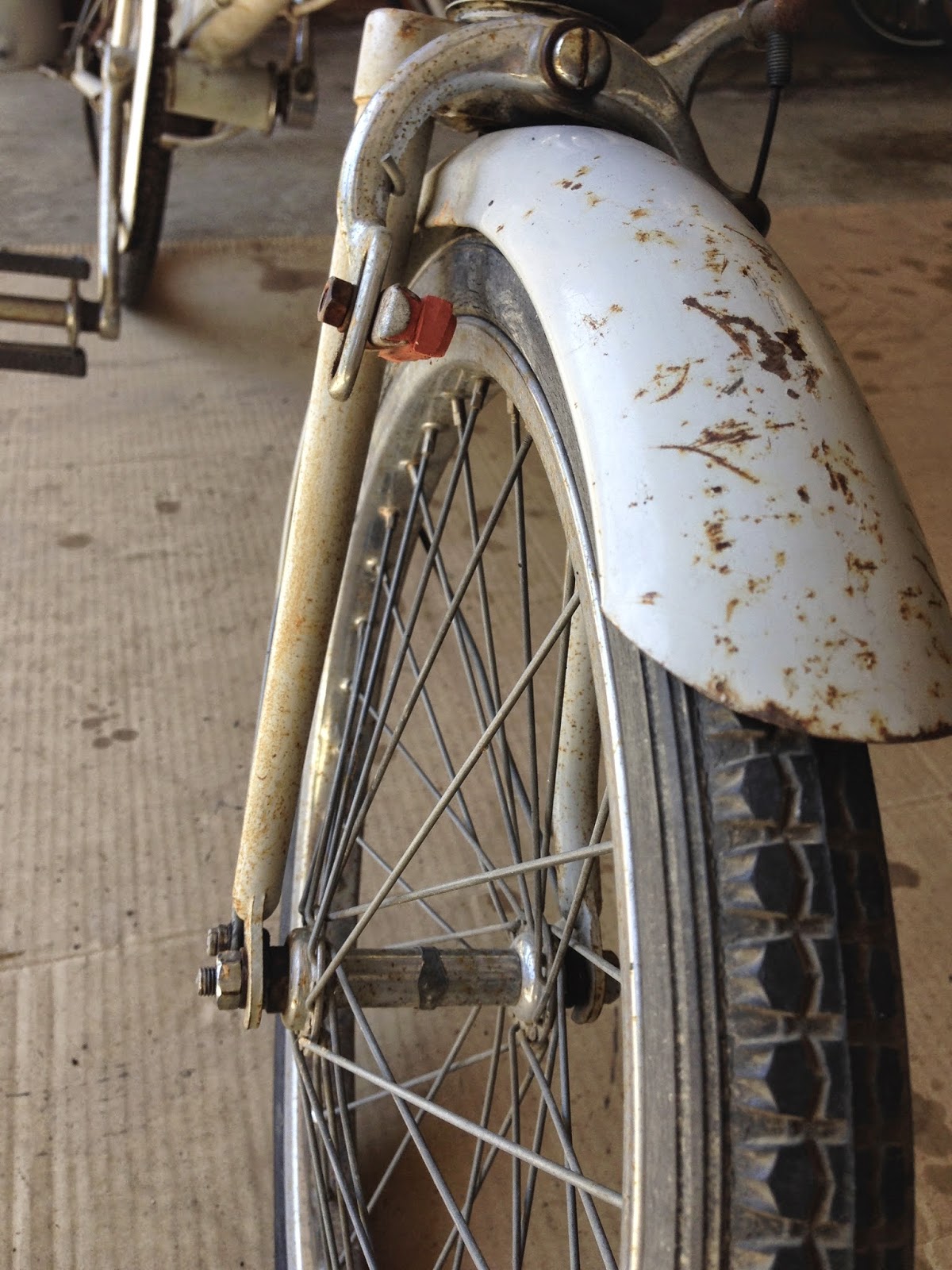 Front tire and fender.  The red brake block was a replacement.  The other three are "John Bulls." 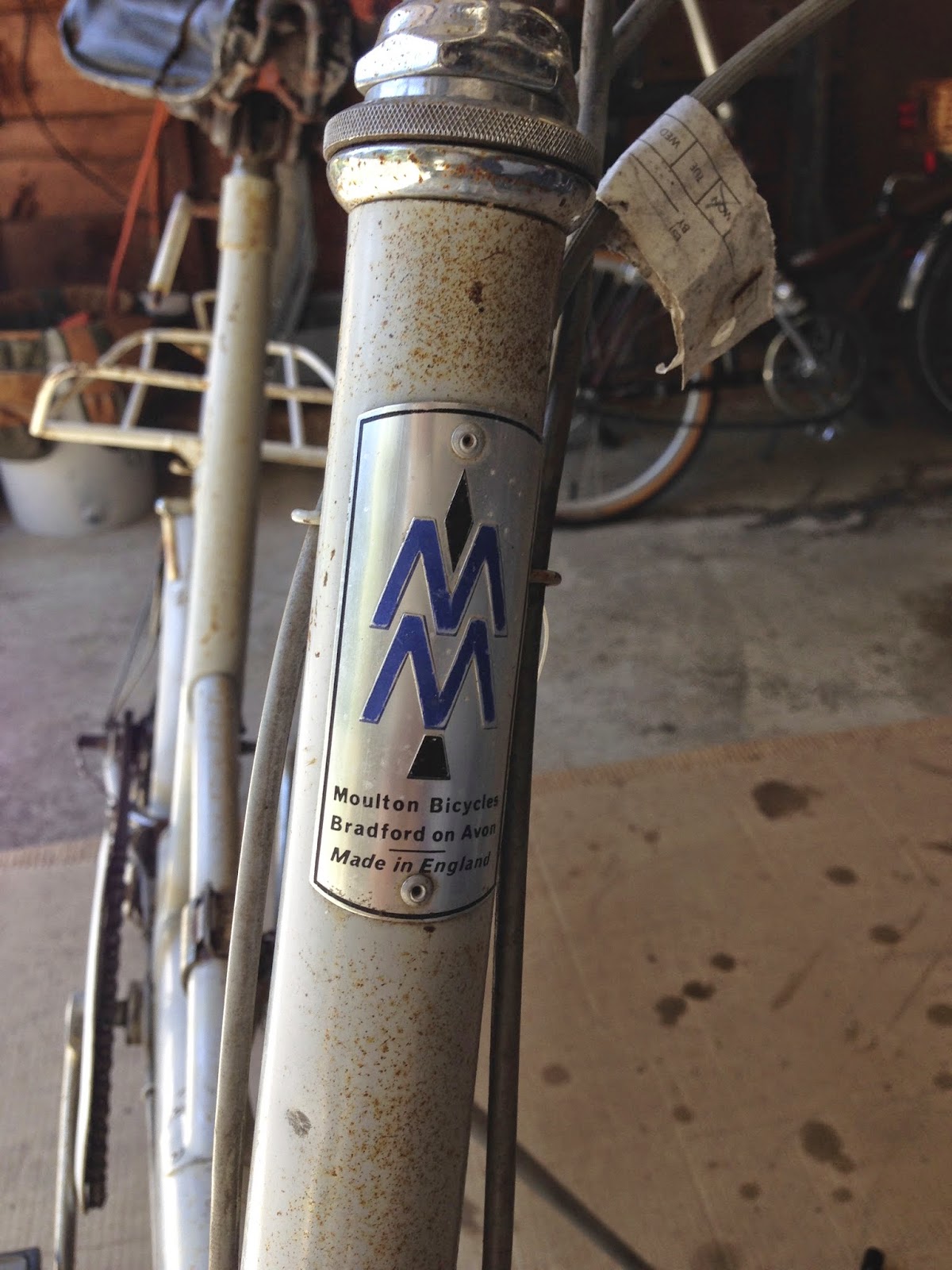 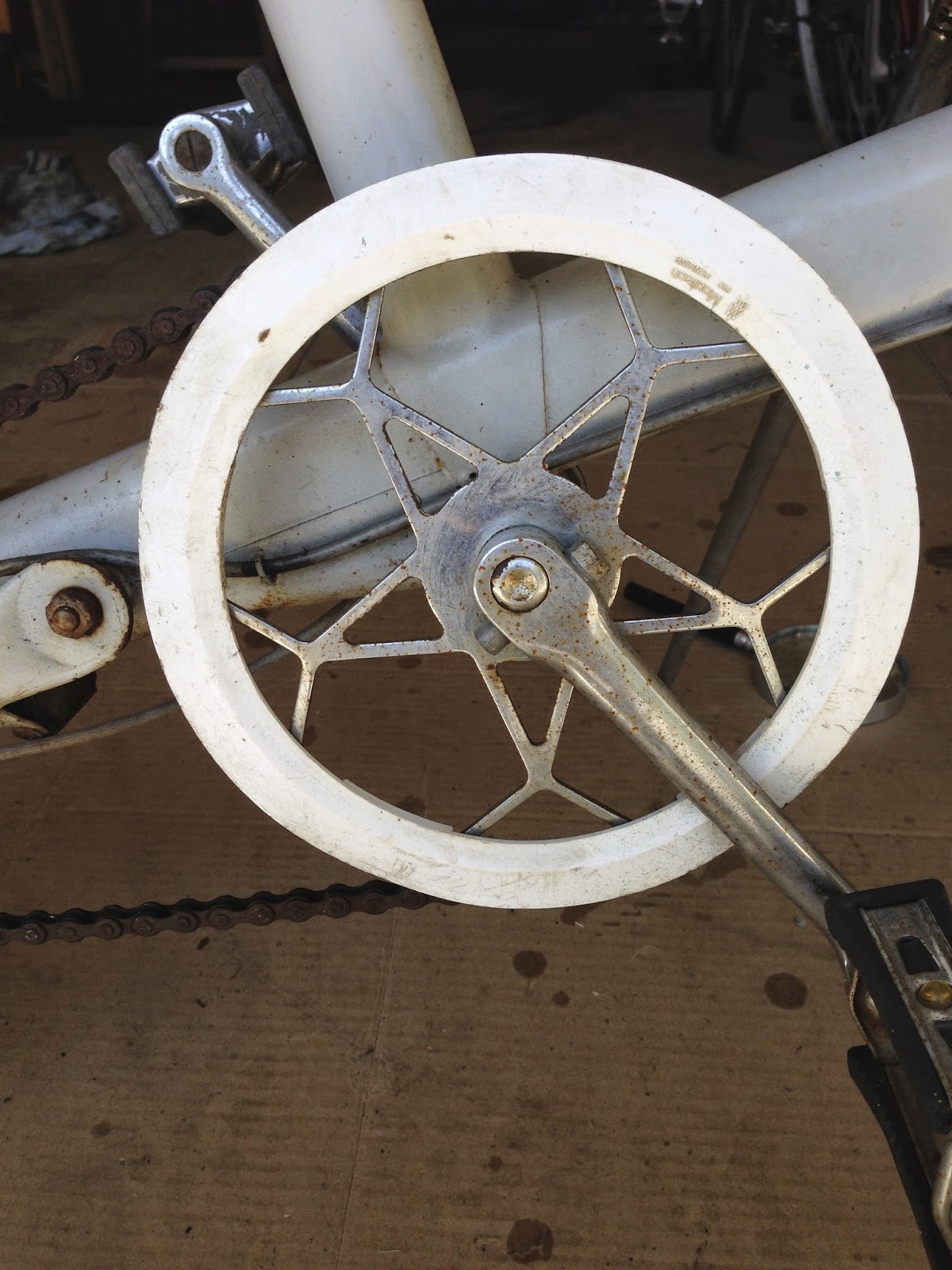 Here's a nice bit.  The pant cuff guard is made of white plastic and snaps onto the chainring.  A couple small stains, but overall in great condition. 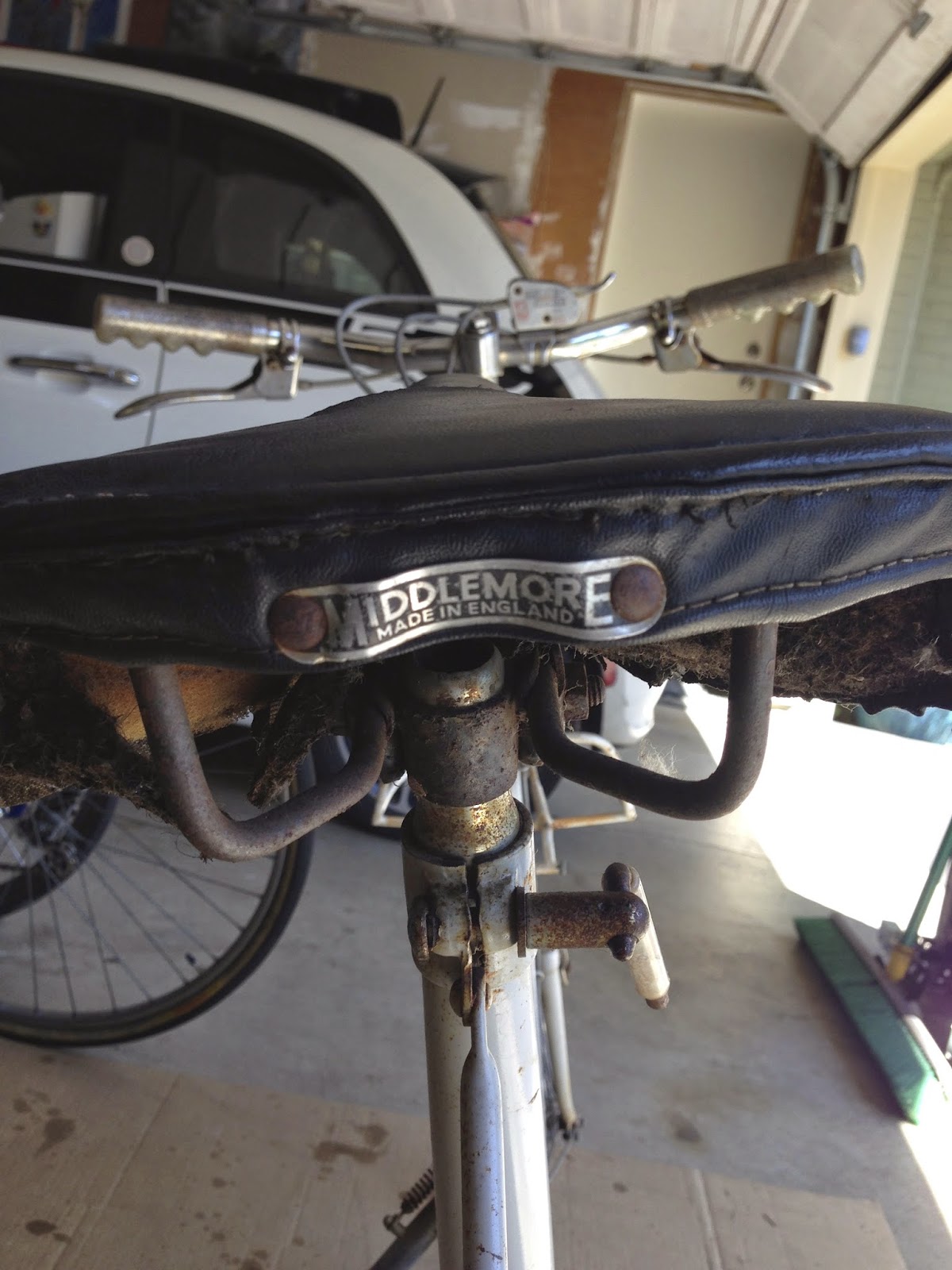 A view of the original Middlemore saddle.  This saddle was in pretty bad shape and smelled horrible.  I had to dispose of it after saving the metal label tag for posterity. 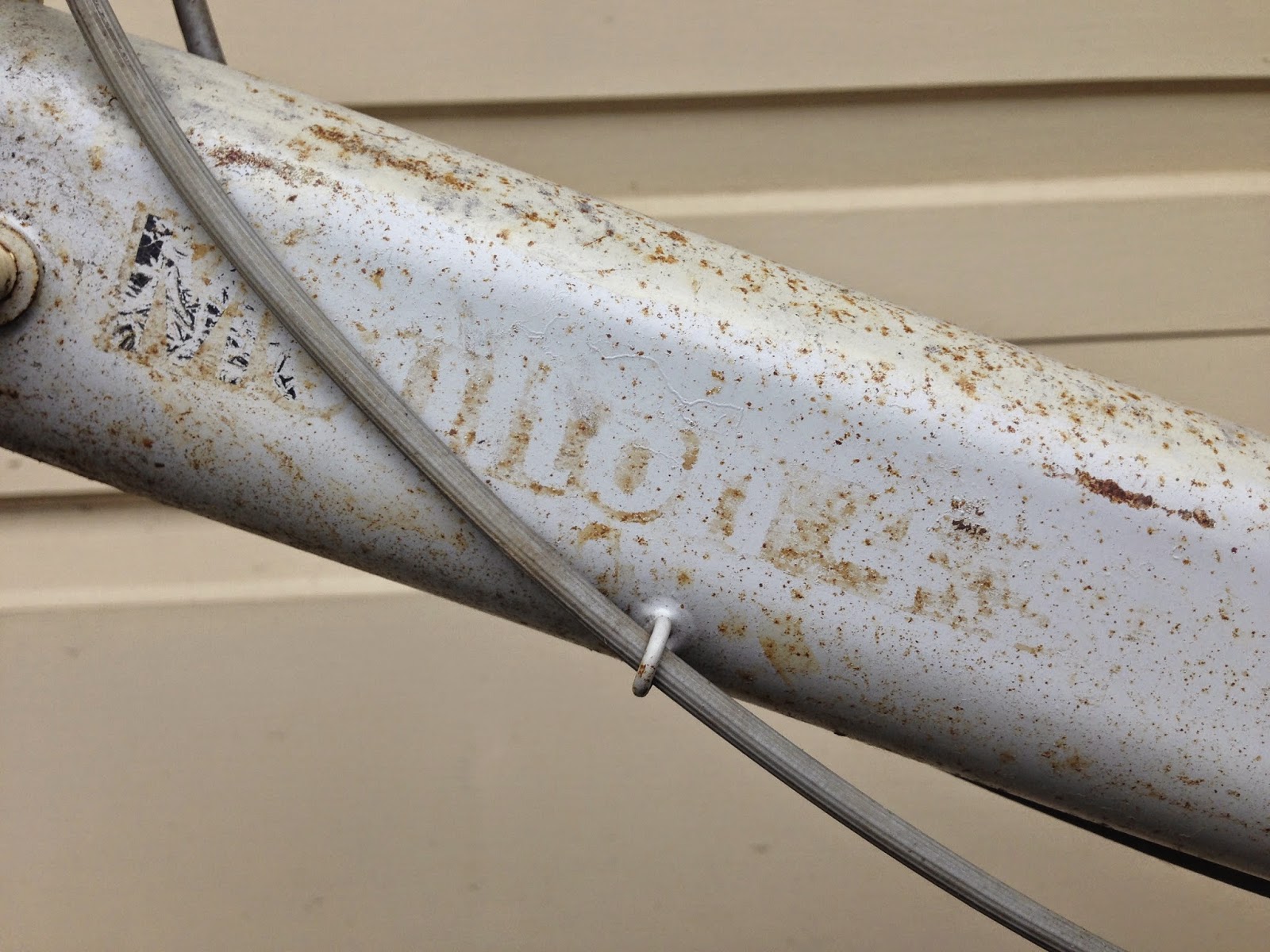 The decals were pretty well shot.  Here you can barely make out the "Moulton 4 Speed" on the left side.

So that is it for now.  A Moulton 4 Speed in very original condition.  This bike has already been fully taken apart and is ready to be sent in to the frame shop to have a welding repair done to the front rack and have the rear part of the frame repaired.  After that, it will go on to the powdercoater for a fresh coat of finish.  I am debating keeping it its original gray, or trying to match the blue or red these came in as well.  I still have a few weeks to make that decision.  In the meantime, I'm going to be throwing myself at the wheels and try my hand at a Sturmey Archer FW 4-Speed hub…