Fed-Ex in the driveway… boxes in the garage… wife with a very dismayed look on her face… it must be another bike!

It may seem from reading this blog that all I do is collect bikes.  But this would be mistaken.  As I mentioned a number of posts back, I've decided to focus my collecting/riding on small wheeled shoppers and folders from the 1960s and 1970s.  There are just too many nice bikes out there, so discipline is essential.  Even with the folders and shoppers, there are a ton out there, so my focus has become even tighter - BRITISH folders and shoppers from the 1960s and 1970s.

I've had a number of RSW's come through my shop.  My first ones were in pretty rough shape.  I ended up selling them (wish I hadn't now, just as parts bikes, but I didn't have the space).  I picked up a Flamenco Red one about 9 months later which I still have.  It's a nice bike, but it was in pretty rough shape.  Not a very nice example, but ridable and it all worked.  A few months later, I got my first RSW Compact, again in pretty rough condition.  It has since moved on too.  I kept the carryall despite its horrible condition.  Hoping to rebuild it.  I am now realizing that I haven't done a post of the RSW Compact I got to take its place!  So, about 4 months back, I came across a green RSW Compact in pristine shape.  I'll need to do a post on it soon.

ANYWAY… the bottom line is that I have the Flamenco Red RSW 16 in so-so condition and the British Racing Green RSW Compact in spectacular shape.  Then this RSW 16 popped up on eBay…

Typically, they are asking a TON of money for them.  This one wasn't.  Don't get me wrong, it was not cheap for a bike, but given its condition and the intact carryall, I didn't think I was ever going to find one for this price…  So I went for it.  In addition, I had recently shed about 5 larger wheeled bikes and had some money left from that process.  Let's just say I'm cash neutral (to positive) on all this!  :-)

So here it is in all its glory! 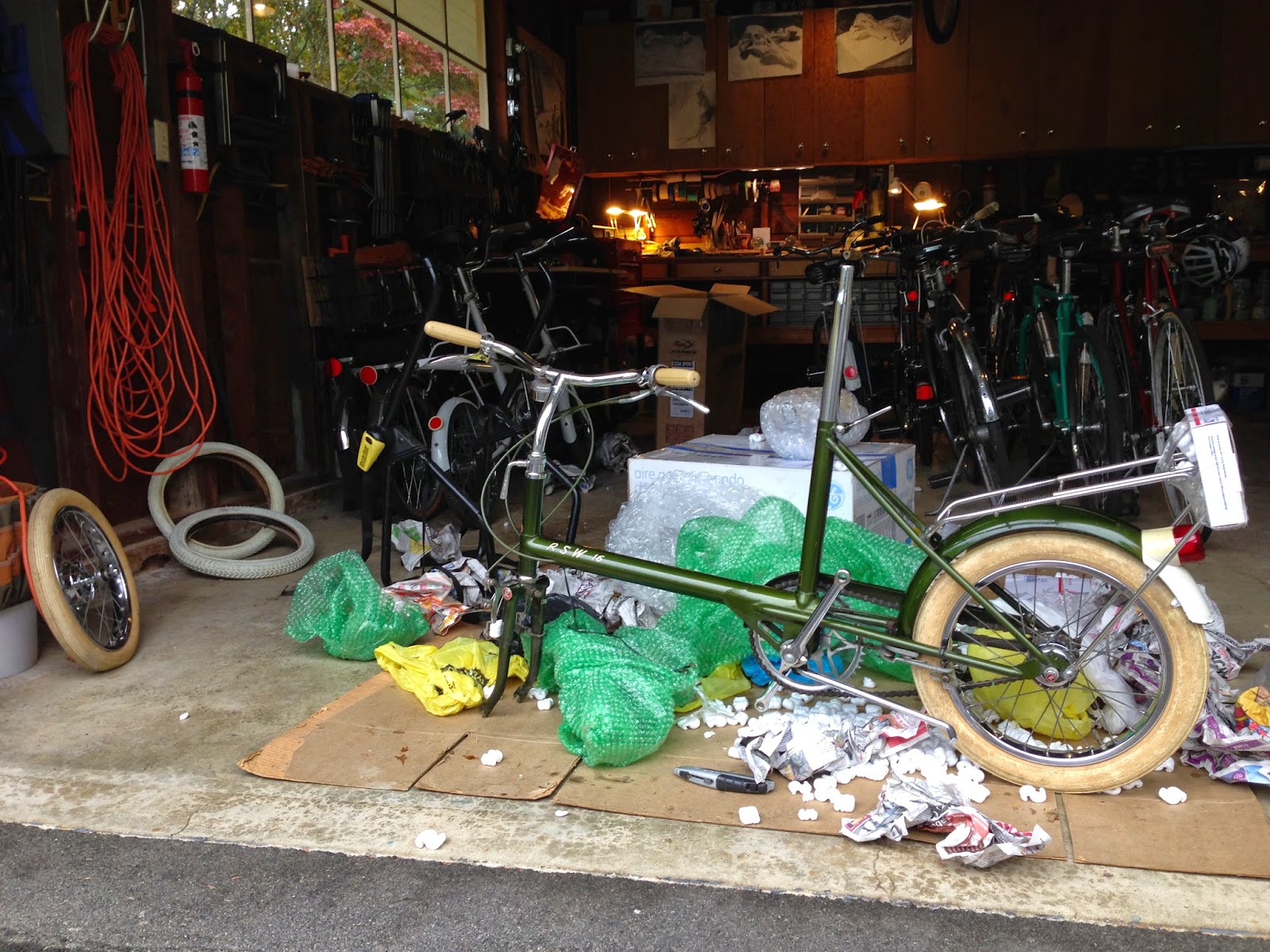 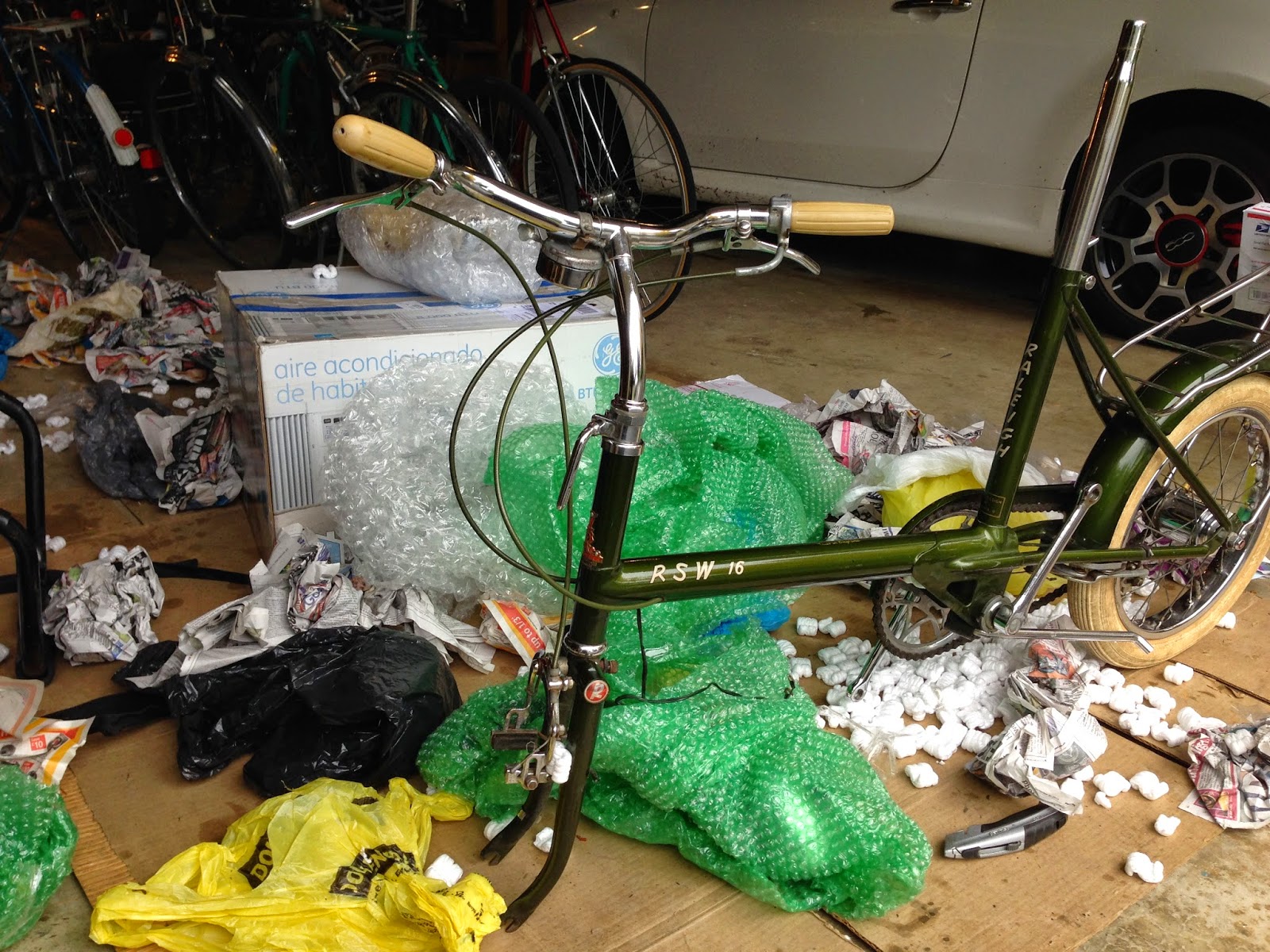 Here are a couple pictures during the unboxing and unwrapping.  The seller did a great job wrapping it up so no inadvertant scratches would appear.  The paint and decals are in nearly mint condition.  All the rubber and vinyl is still sound.  There will be a good use for that bike shipping box too.  I still have a few larger wheeled bikes to move on. 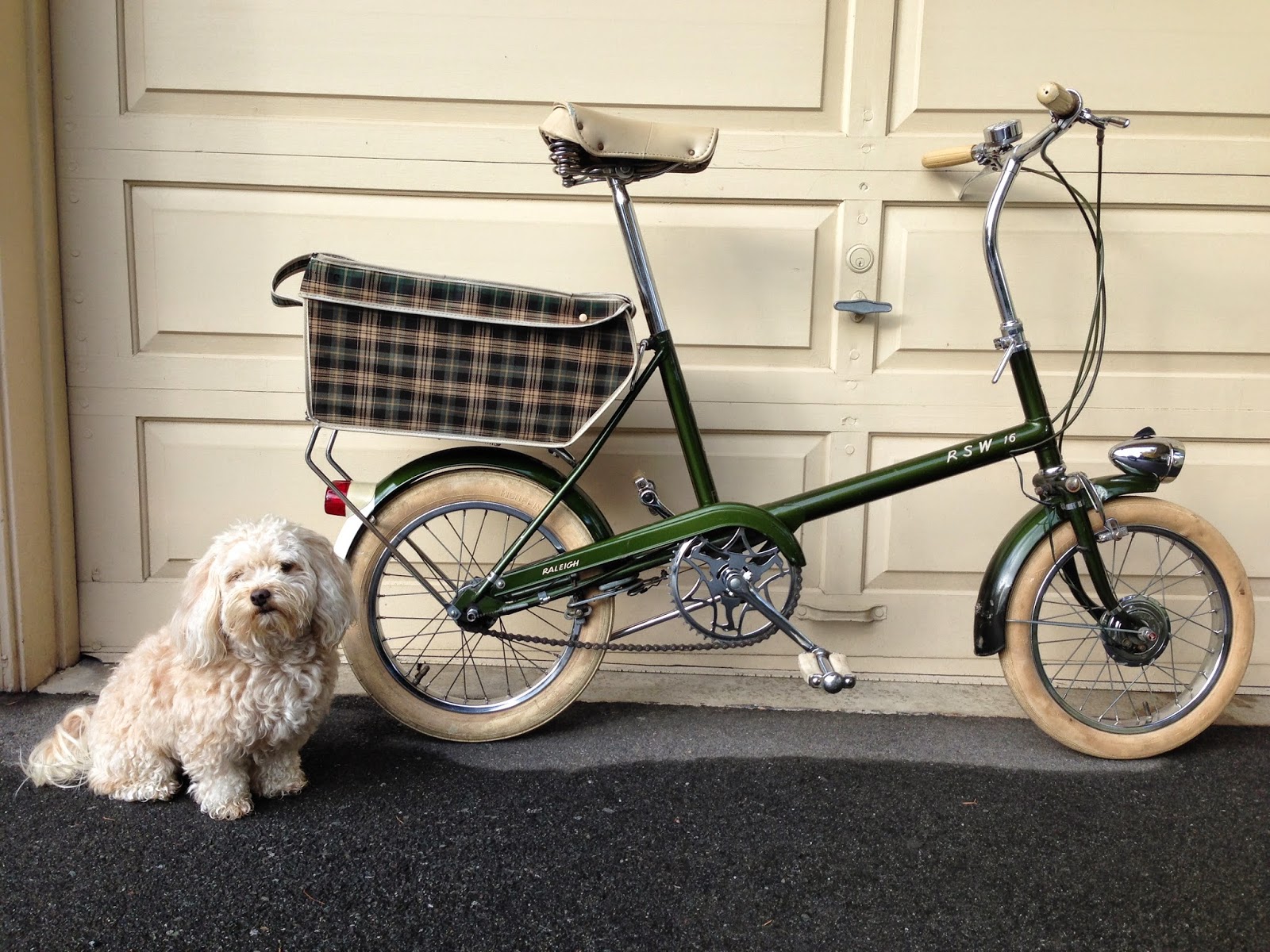 Here is is all put together.  Our dog, Hazel, can tell I'm thinking she might fit in that basket.  "No way!" she says.  Hazel is a Havanese, and, completely off topic, she's a great dog.  Havanese are really great dogs if you are into smaller dogs.  Anyway, the bike works, all of it.  Lighting system, shifting, steering, wheel bearings.  The only thing I can see that is wrong with it is the spring loaded rack.  Typically the springs are inside a couple tubes and are held tight by the tension of the spring pulling against a small metal plug at the end of the tube.  The plugs are gone and the prior owner stretched the spings and just hooked them onto another bar in the rack… it works, but its very sloppy.  I'm going to see what I can do to get it back looking right. 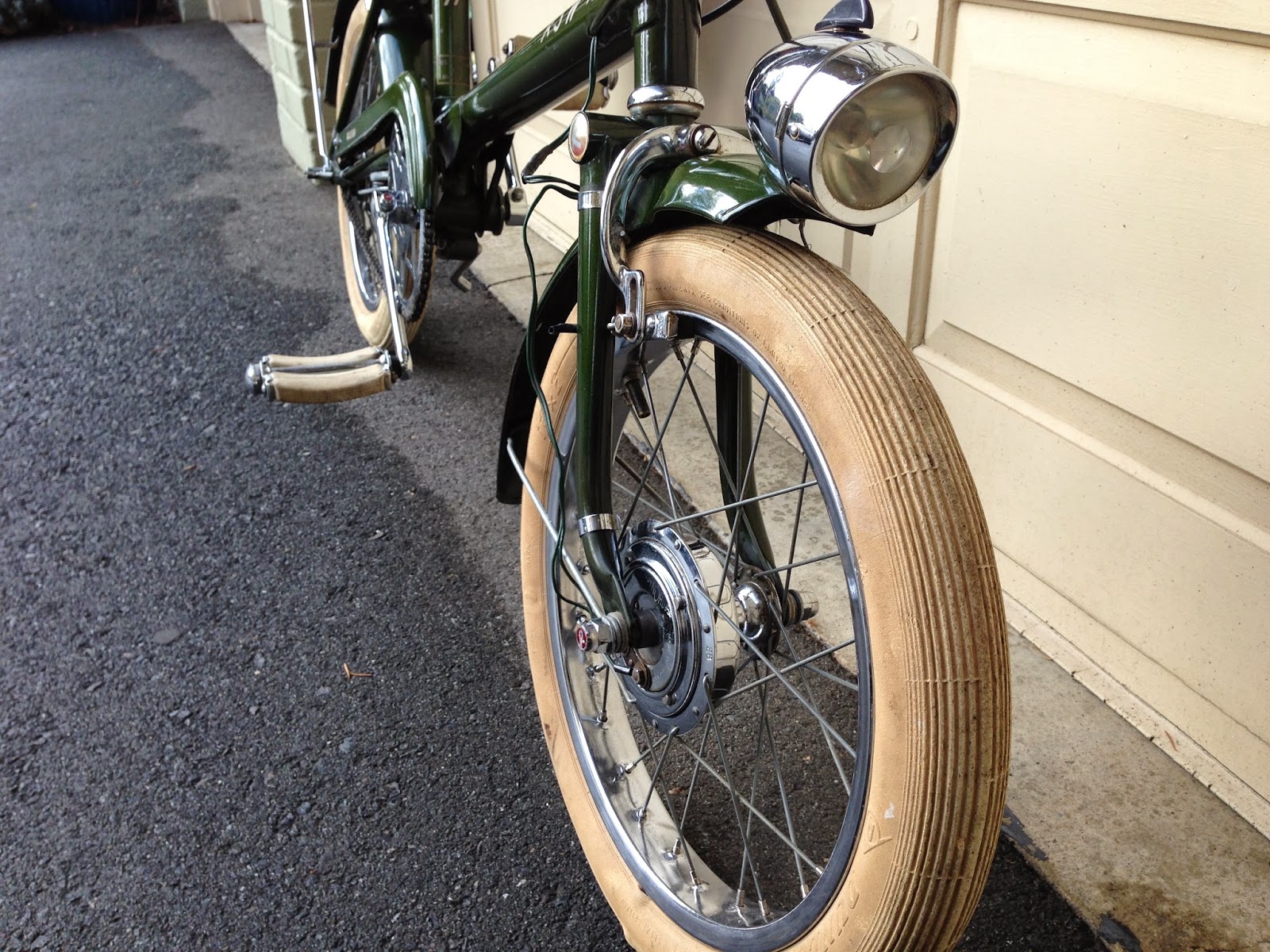 Front quarter view.  Dynohub - no rust; wheel rims - no rust; Chrome headlight… perfect.  Lokk at those pedals though!  Warped as if from heat. 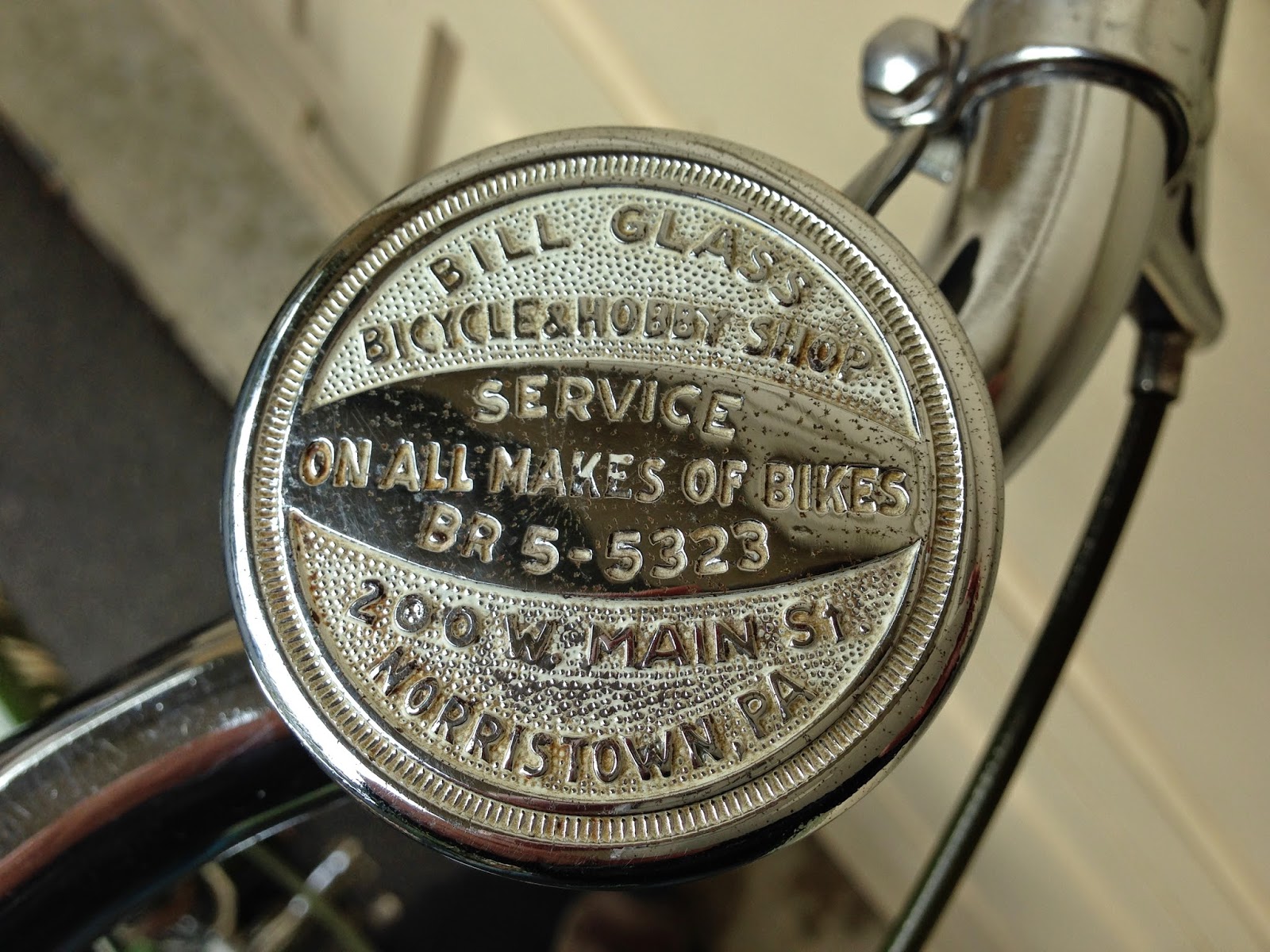 Look at this thumb ringer bell!  "Bill Glass Bicycle and Hobby Shop.  Service on All Makes of Bikes" This thing is SOLID and the chrome plating is the best I've ever seen.  Gorgeous. 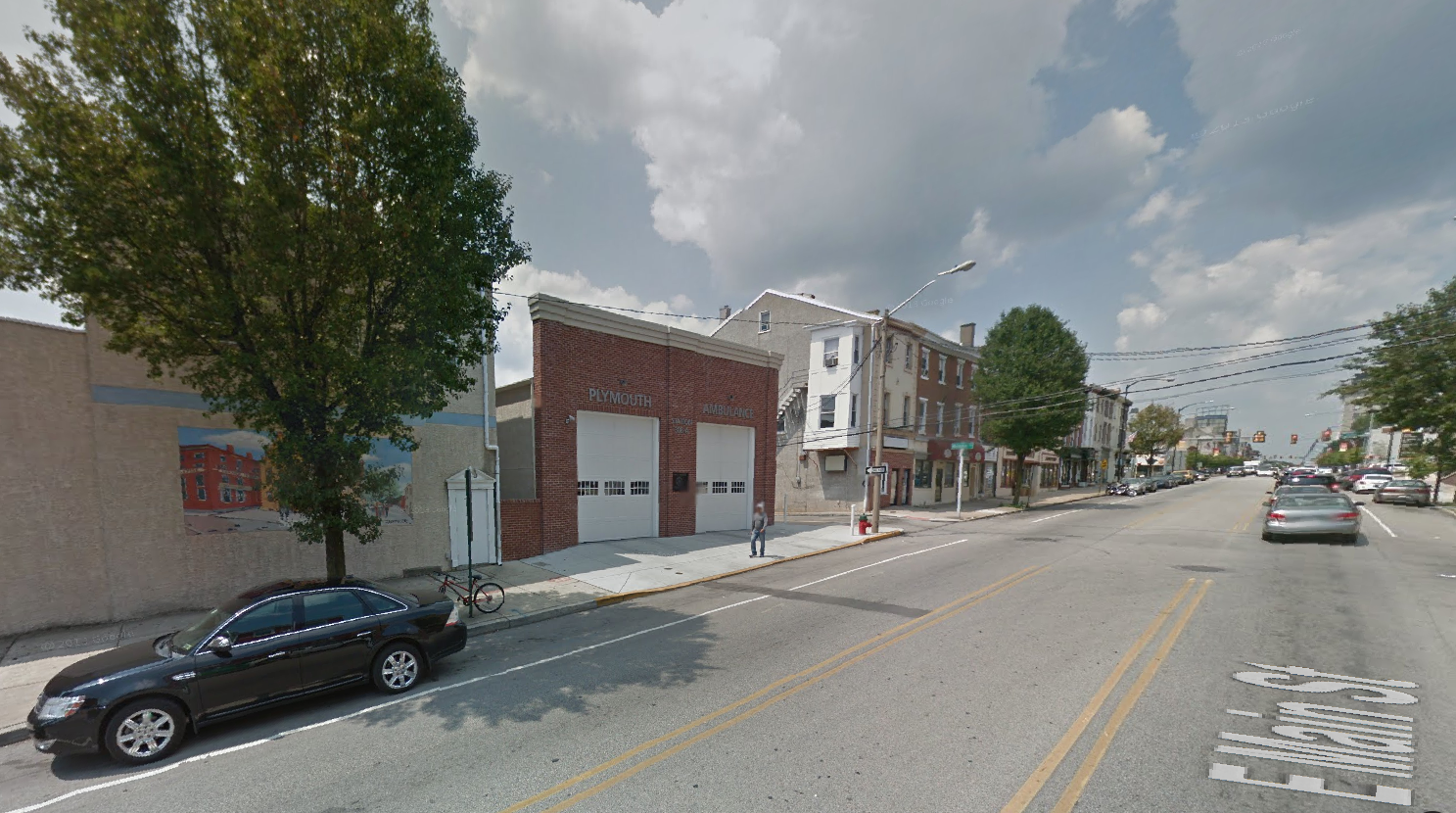 Here is 200 West Main, Norristown, PA now… Plymouth Ambulance seems to have taken over Bill Glass' place.  At least there is a bike out front! 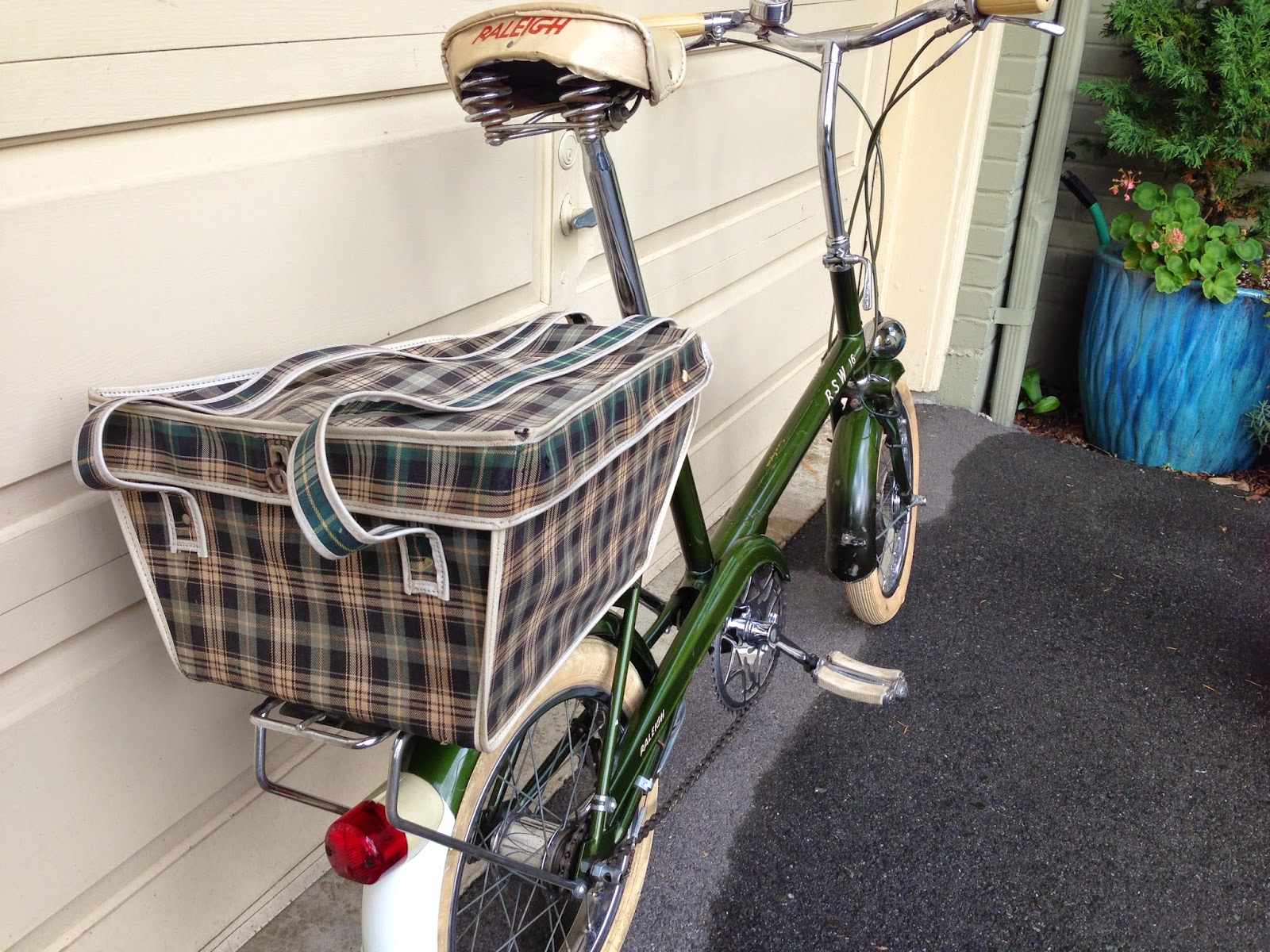 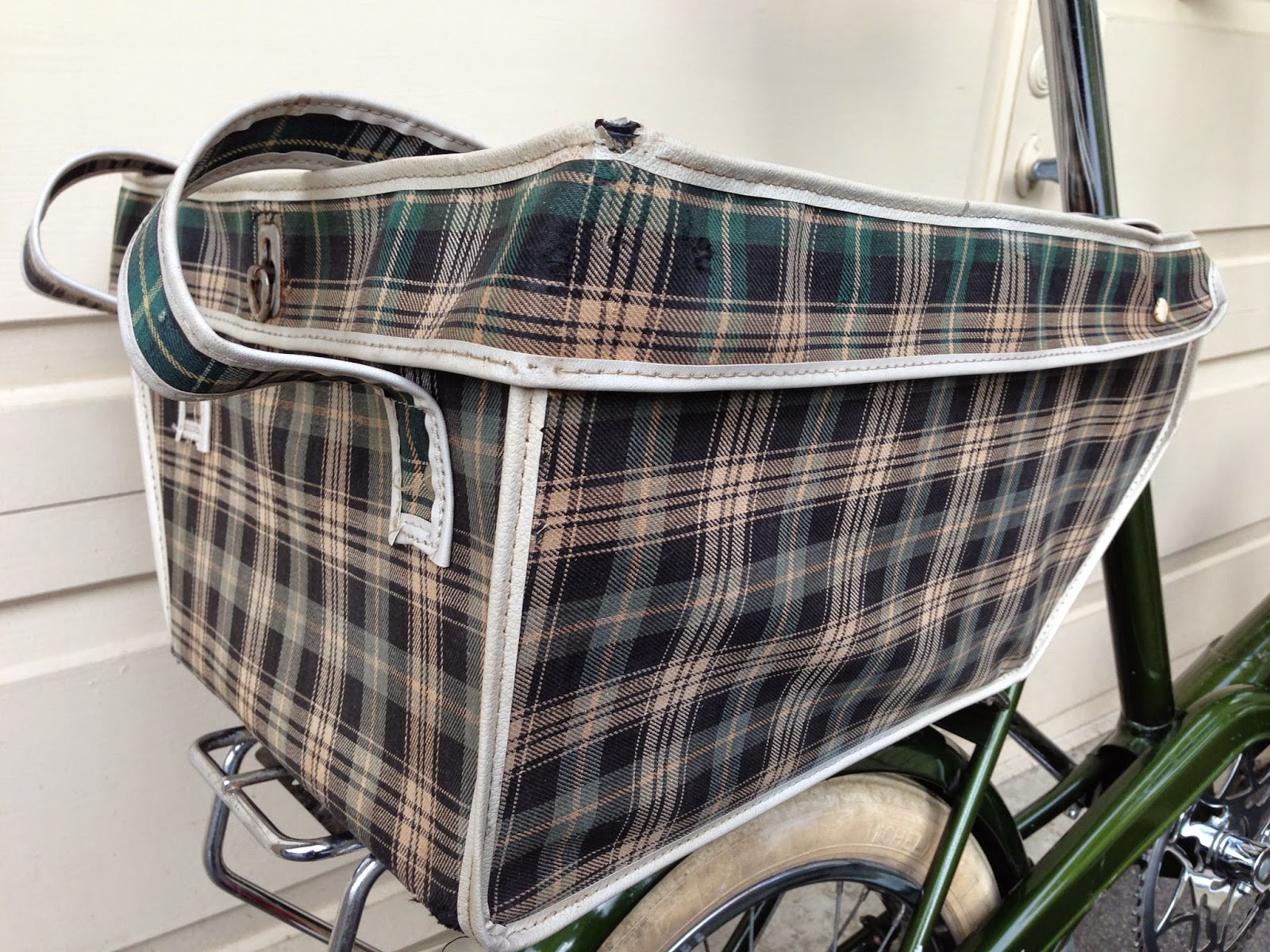 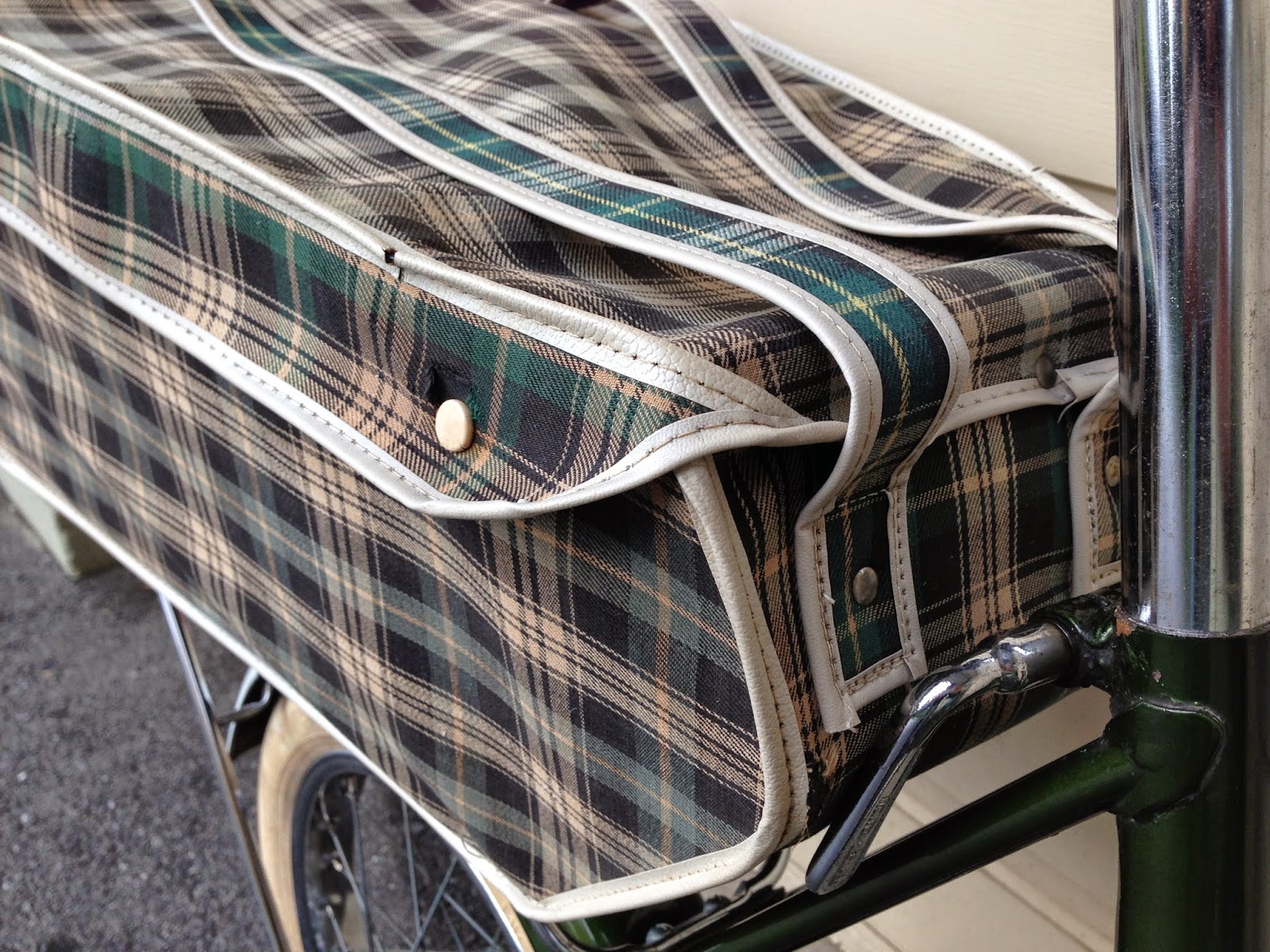 Here are a few of the carryall.  Finally, I've got one in decent shape.  This one has a couple tatty spots, but overall it's a real showpiece.  I would never use it, except in a show ride or something.  But it's a great example of the kinds of gear that went along with these bikes.  I still want to try my hand at re-fabricating one…

So there she is.  Hopefully, this is the last one.  I've got good examples of the two primary bikes of this series.  The plan is (currently) to clean up the Flamenco Red on and make it a rider.  The two green ones will come out on sunny days.  I still have my eyes open for a MarkII or MarkIII.  I've heard the MarkIII has a longer head tube so it is better for taller riders.  This might be worth looking into.  Anyone?

I have no idea why I'm collecting this stuff…  It is just fun to have these little visions of the past.

This time, I've come across a vintage fold-out brochure advertisement for the Raleigh RSW and RSW Compact.  The paper is in excellent shape, no yellowing or foxing and the colors are vibrant.   As a piece of history, this is in as great of shape as one could find.  The brochure measures 5.5" x 8" in it's fully folded state, opens out in it's first unfold to 5.5" x 16" and with the ultimate fold out to 11" x 16"

Now for the pictures: 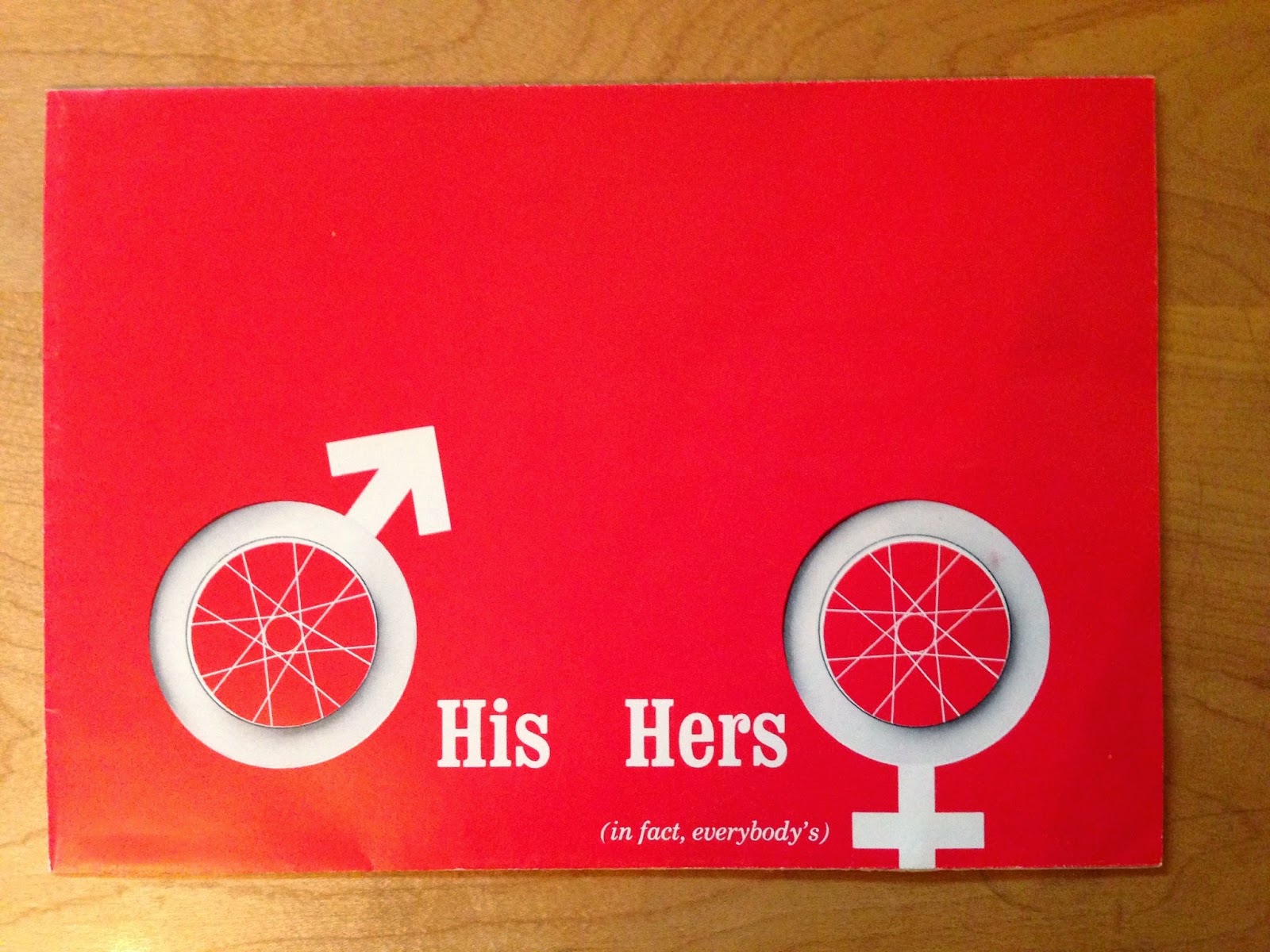 Here is the front of the brochure.  Obviously it would be to ANY bicycle manufacturer to eliminate the need to create mens AND women's bicycles…  The mixte frame was one effort at this.  Raleigh was trying to sway the market too. 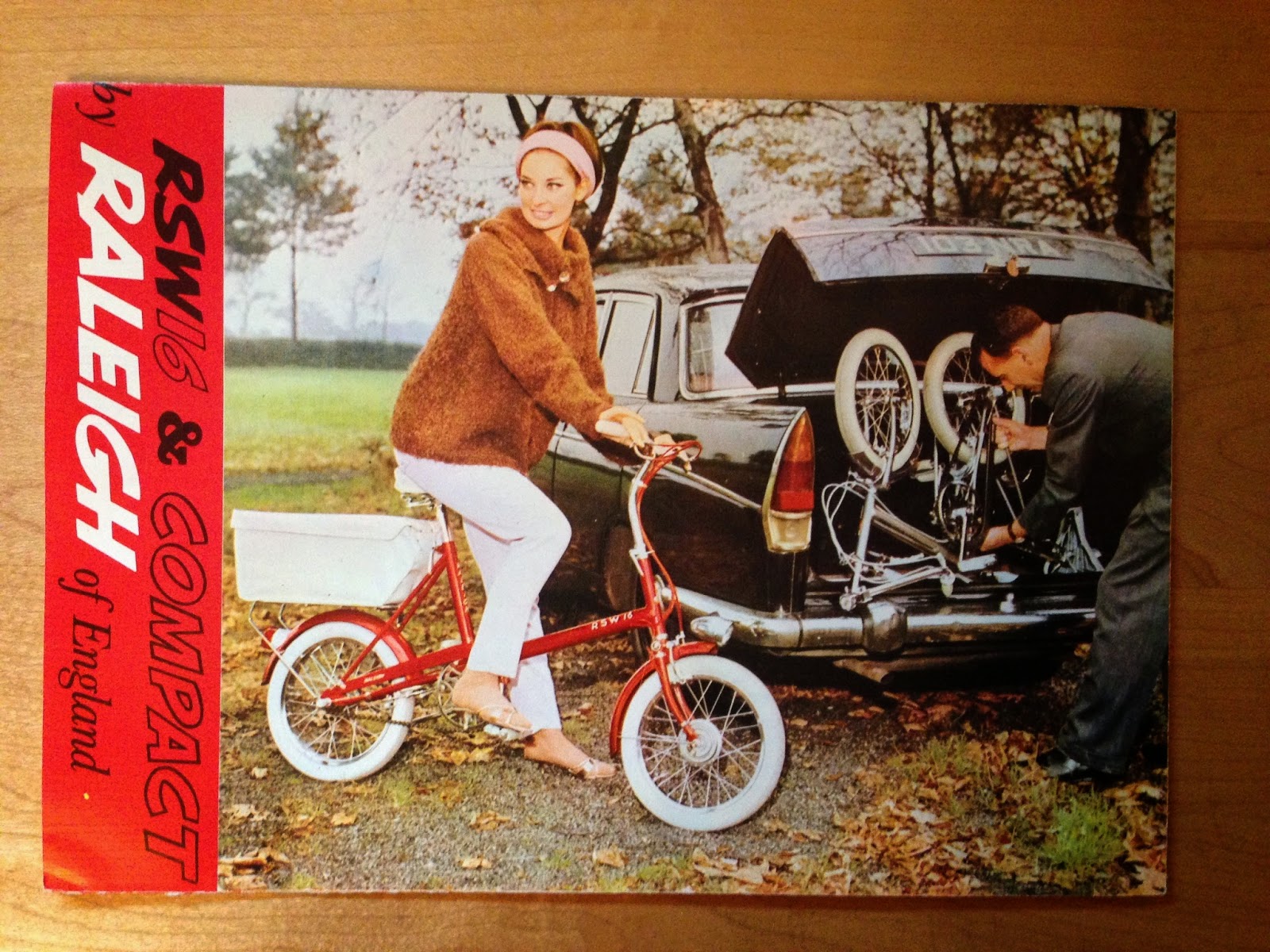 Here is the back side in its folded state.  The gent attempting to get a RSW Compact into the boot.  I wonder how he's going to fit that nice non-folding Flamenco Red one in there?? 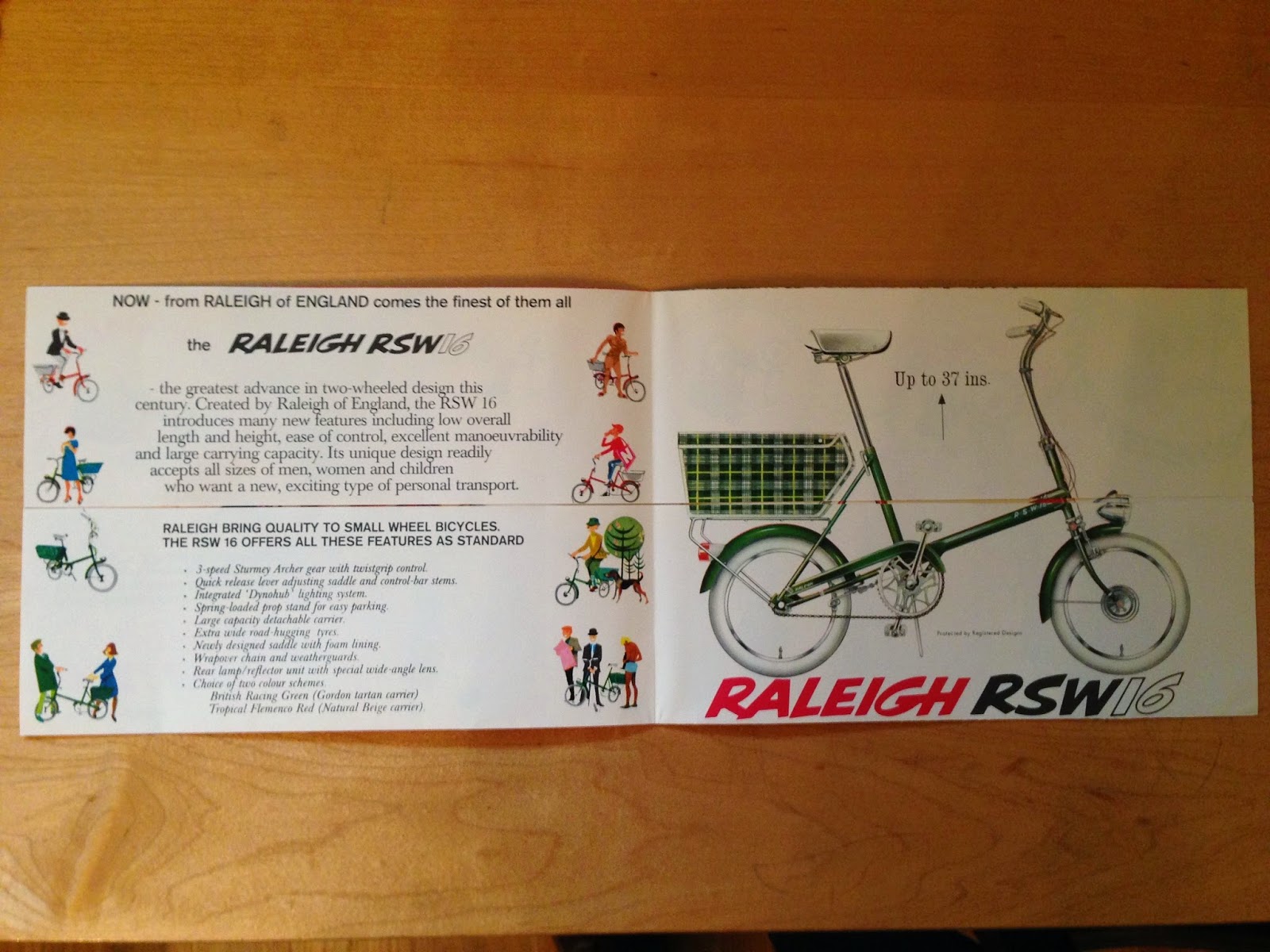 The brochure opens out long-wise to reveal some advertising copy and a nice photo of the RSW (with carry-all) in British Racing Green.  The final unfold splits down the center length-wise to open the full page out… 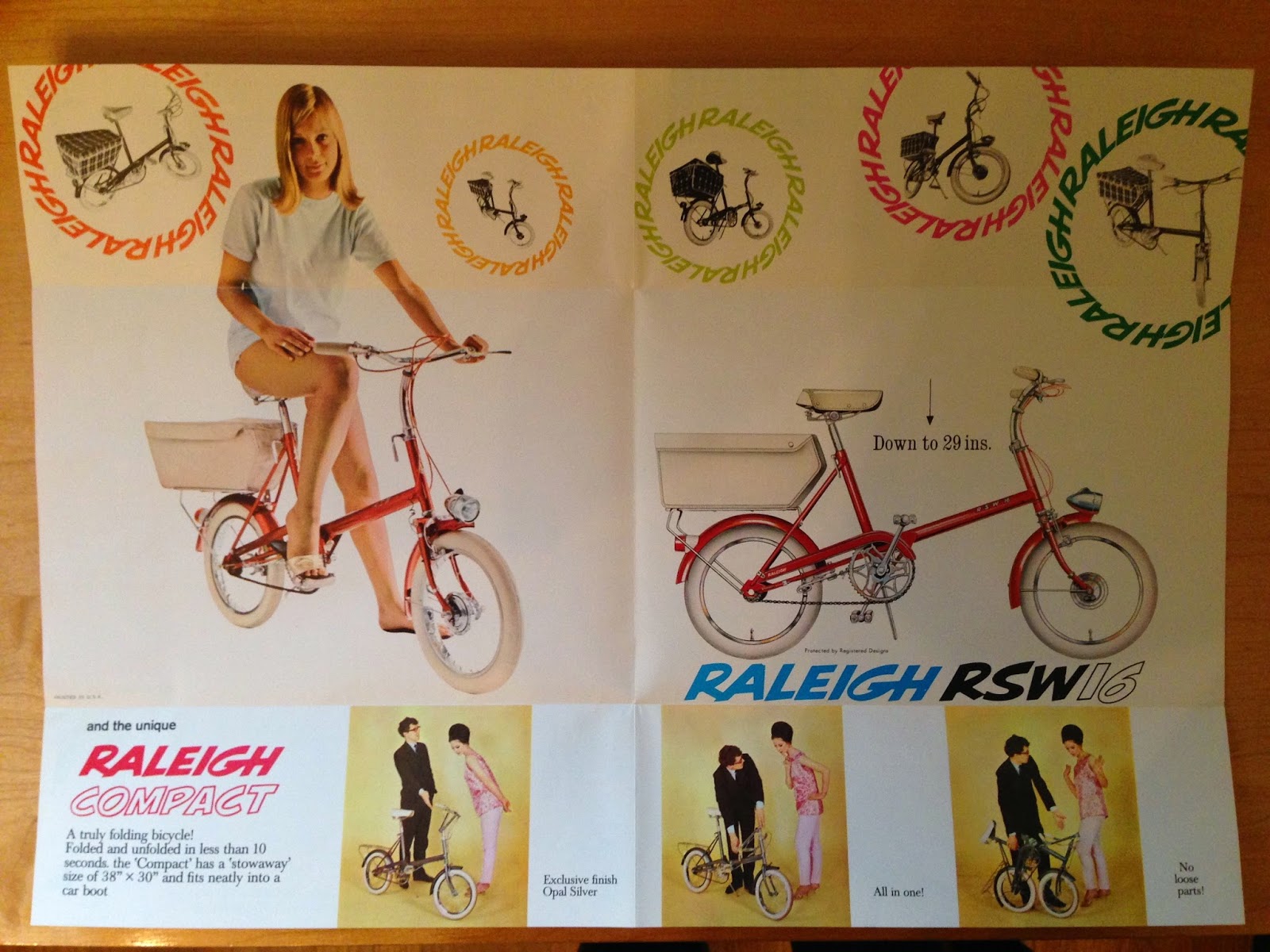 Here we have a winsome blonde in 1960's appropriate short shorts letting us know that all the beautiful people should own one…  On the bottom, a gent demonstrates the fold to an amazed beehived onlooker… "No loose parts!"