Tony Hadlund's blog has an excellent overview of this bike.  I won't dwell on the details here.  Suffice it to say they are REALLY hard to find, especially here in the US.

What I WILL dwell on is the story of how I found and finally got this bike to be a member of the herd! 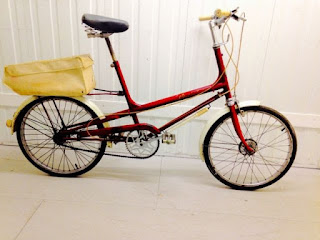 Ever since I had learned about these bikes, I would occasionally look at eBay to see if any would pop up for sale.  For years, nothing.  Just by chance, I was checking out the UK eBay in late 2015 and saw a post for a "Royal Enfield Revelation" but the bike that was pictured, while a Royal Enfield, was not the Rev you see above.  It didn't look like any bike I'd ever seen before actually.  Disappointed, I copied and pasted my eBay search into Google just to drool over a few pictures and re-read Tony's blog post about Revelations....  To my surprise, one of the first search returns was for a Rev that was for sale on Gumtree, the British form of something like craigslist here in the USA.  I clicked in and saw this bike.
"What are the chances it would still be available?" I thought.  "Probably a post from a year ago... already gone..."  After some emails with the seller, I found out the bike WAS still available, located in London and he'd be happy to ship it!!  The bike was being sold for about $100, shipping would be twice that, but... IT'S A REV!!!  I went for it.
The long and short of this story is that the guy, a very nice guy actually, never shipped it.  We emailed over and over, I even called him and we talked... a couple times... he said he'd send it, but just never got around to it.  This went on FOR OVER A YEAR.  Finally I got despondent and figured I was just out the cash... what a bummer.  THAT CLOSE to actually getting one... I gave up...
2017 - Spring:  We are taking a trip to London to see my wife's family and do a little traveling in the summer with my youngest son.  I get thinking about this bike.  Maybe I should reach out to the guy again and let him know I'm coming to get it.  I go back onto Gumtree and... the bike is up for sale again!!!  posted only four days prior.  I immediately email the guy and lay into him... "don't sell MY bike! I paid for it and I'm coming to London to get it!!"  I figured he'd ignore me and just sell it.  But amazingly, he got back to me.  "OK, let me know when you are here and I'll get it to you." 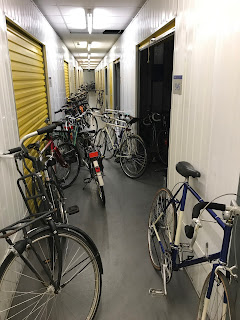 SO... London, summer of 2017.  I reach out to my guy and get directions to a mini-storage place near the Borough Market and Shakespeare's Globe Theatre.  He is running an entire vintage bike business out of a bunch of storage units.  He had to pull out all these bikes to get to it.  It seemed really sketchy, but.... 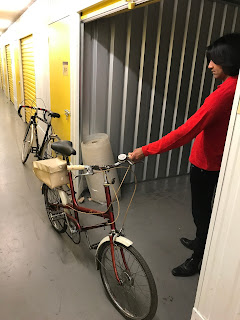 ...HERE IT IS.  That is the guy I've dealt with all this time.  He is a little cagey about wanting to be in pictures, but I got this one of him holding the bike.  Also notice that it's missing the pump that was pictured above.  I should have noticed it at the time, but I was very happy to just have the bike.  I had to eat a portion of the shipping I'd already paid, so the overall cost to me was about $150 USD.  Honestly, I thought that was a good price.  The tires were full, so I hit the road for a 13 mile trip across downtown London back to our airbnb house in Ealing... in the ONLY driving rainstorm of the entire trip.  Figures.  Here are some photos of the journey and the route.  I'll never forget this adventure. 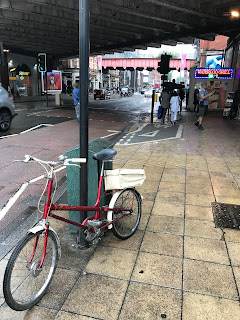 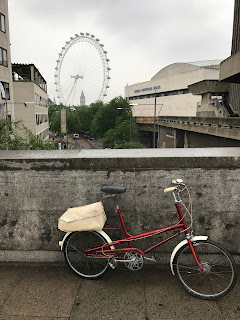 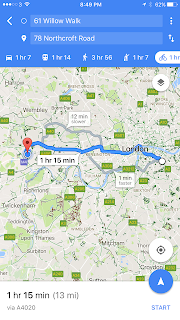 Once I got it back to the house, I started to look into ways to ship it back.  Another really lucky thing happened. One of our neighbors, who happens to be our financial planner, was living in London for a year with his whole family, very near the house we were staying at in Ealing.  He offered to pack the bike in the shipping container they were going to bring back - for free!  I just would have to wait a few months until it cleared into the US.  Done.
So after seeing this bike in late 2015, going through all the rigamarole of getting it and shipping it back, I finally was riding it around the block here at home in late 2017, nearly 2 years since I first laid eyes on it.  I had found an after-market pump in Oxford to replace the original.  Too bad, those pumps are probably like hen's teeth to find.
As of now, the bike is hanging dry and snug amongst my other treasures - a few Moultons, some Raleigh RSWs and Twentys.  The plan:  keep it as is. The paint is a bit rough, but it's all there.  I'll get some pictures up shortly of the current look of it.
Posted by charles at 4:18 PM No comments:

I have been a little remiss in keeping this blog current.  Four years remiss.  Many years ago, when I started it, the "dot-com" domain for veloscene was not available.  Just the other day, I found that it now was, bought it, and now this blog resides under the new home of www.veloscene.com.  I will eventually let the .net one expire...

I will be posting soon on a whole new crop of bikes (and a few of the old ones) so stay tuned!